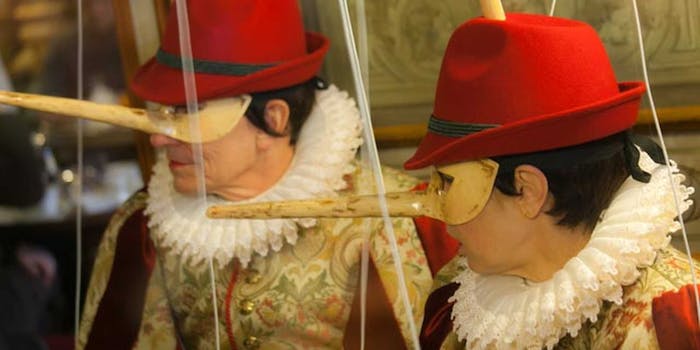 Scientists in Europe are working on a program to detect lies on Twitter. Pheme, the social media “lie detector,” will be ready to polygraph the social network by the end of 2015.

Pheme will work by analyzing trends on Twitter in real time so that emergency services, governments and journalists are able to sift through the web of distortions and untruths bandied around online.

It’s possible that Pheme would have been helpful in recent times of crisis, where things that turned out to be untrue went viral on social networks (case in point, the Boston Marathon Massacre, during which the Internet conducted its own ill-informed man hunt).

The researchers claim their new robot would have been able to determine, for example, that dangerous animals had not in fact been released from London Zoo during the 2011 riots, or that the London Eye had not been set on fire, as was rumoured on Twitter.

“People do believe things they hear on the internet,” said one of Pheme’s researchers, Kalina Bontcheva, from the University of Sheffield’s engineering department. “In critical situations, you can instead show reliable information or alert the authorities before things get out of hand.”

Rather than simply tell whether a statement is true or false, Pheme will place suspicious statements into four categories: speculation, controversy, misinformation, and disinformation.

Rather like Google’s algorithms, Pheme will aim to determine a statement’s truthfulness based on the reliability of its sources and the history of its authors.

While the rumours about the London Zoo and the London Eye would be easily verifiable to eyewitnesses, the project claims to be useful in situations where the truth isn’t so clear cut. Researchers say bogus health advice and warnings will now be easier to detect by cross-referencing tweets with PubMed, an online database of medical papers.

The £3.5 million ($5.85 million) project is funded by the European Commission, one of three governmental bodies in the European Union’s 27 member states, and is currently projected to run for three years.

It is possible that Pheme will also be used to monitor the Web for other information that could be inconvenient for governments and businesses, rather than simply untrue. British comedian David Baddiel wondered whether it would understand jokes.

Others were more skeptical, suggesting the project has more sinister motives.

#PHEME is a governmental conspiracy, funded by the EU, to monitor citizens.

Could this be true? Only Pheme can really know.

Photo via Alaskan Dude/Flickr (CC BY 2.0)