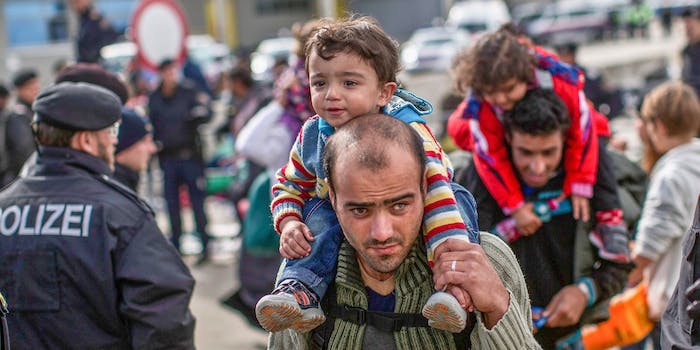 Photo by Freedom House/Flickr (CC BY 2.0)

It turns out the man she assaulted is a well-known Syrian football coach.

A Hungarian camerawoman seen kicking two refugee children and tripping an older man in a video this week is now facing criminal charges.

Petra László of N1TV, a news company linked to Hungary’s far-right Jobbik party, was reportedly fired this week after a video surfaced online that showed her assaulting several refugees who were fleeing police near the border village of Röszke.

In one video clip, László is seen tripping an older man sprinting with a little boy in his arms. The man falls and lands on top of the boy. In photos and video later circulated online, László is seen kicking another young boy and girl.

The man who was tripped was later identified by the Hungarian news website Index.hu as Osama Al-Ghabad, a former coach for Al-Fotuwa SC, a Syrian football club.

The Syrian father and his son, who got tripped up by the camerawoman #PetraLaszlo, he was a soccer coach in #Syria pic.twitter.com/desV2YaqPz

On Tuesday, opposition parties Együtt-PM (Together party) and the Democratic Coalition said they planned to initiate charges against László of “violence against a member of the community,” which is punishable by five years in prison.

Szabolcs Panyi, an editor and journalist at Index.hu, tweeted on Thursday that László had been charged with “truculency” but could still face more serious charges, according to prosecutors.

The incident occurred while hundreds of refugees—mainly Syrians fleeing civil war—ran from a “collection point” in Röszke near the Hungary-Serbia border. People interviewed at the camp complained of being detained in a cornfield with inadequate shelter and blankets, according to reports.

Around 200 refugees broke away from police and fled toward a highway, beginning a 170-kilometer walk to Budapest, according to the United Nation’s refugee agency.

László was reportedly dismissed from her job at N1TV on Tuesday due to “unacceptable behavior.” A statement on the station’s website read: “The camerawoman’s employment has today been terminated with immediate effect, the case is now closed for us.”

Photo by Freedom House/Flickr (CC BY 2.0)