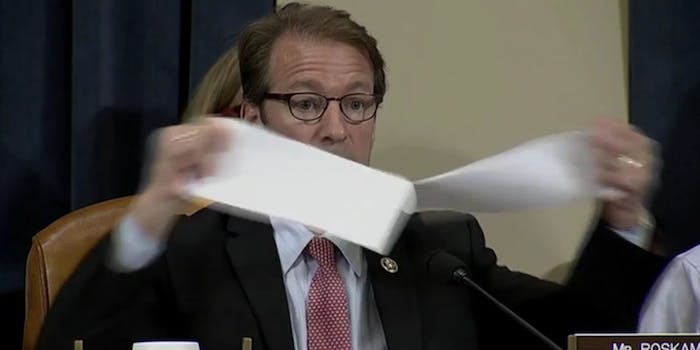 The questioning has now lasted for more than 11 hours.

And so, it has come to this.

Rep. Peter Roskam (R-Ill.) took to ripping up paper in an attempt to better illustrate his criticism of former Secretary of State Hillary Clinton, who fielded more than 11 hours of questions from members of the House Select Committee on Benghazi, which is investigating the 2012 attack in Benghazi, Libya, that resulted in the deaths of four Americans.

The paper-ripping moment came as Roskam chastised Clinton for the State Department’s denial of some additional security resources made by staff members in Benghazi, an issue that has come up repeatedly during the enduring inquiry.

“Here’s what basically happened to their requests,” Roskam said. “They were torn up.”

Clinton denied Roskam’s claims, saying that “many” security requests were granted. “There were affirmative responses to a number of requests for additional security,” she said.

This was not the first tense moment of the hearing between Clinton and Roskam. Near the start of the hearing, which began at 10am ET on Thursday morning, Roskam repeatedly paused his questioning of Clinton every time she looked down at her notes.

“I can pause while you’re reading the notes from your staff,” Roskam said, to which Clinton responded: “I can do more than one thing at a time.”

It is unclear whether the Benghazi hearing has shed new light on the 2012 terrorist attack on an American compound in the city, which is its purpose, according to the Republicans on the Committee. It has, however, sparked renewed sympathy for Clinton, the 2016 Democratic presidential frontrunner, with the hashtag #FreeHillary trending on Twitter as the inquiry enters its eleventh hour.

Ten minutes until we hit the 11 hour mark. #FreeHillary #BenghaziCommittee

Next thing they're gonna ask her is if she knows anything about the missing Malaysian airplane. #BenghaziCommittee #FreeHillary

yeah, now I'm at the point of yelling TAKE THAT TREY GOWDY when the ballot goes in. #FreeHillary https://t.co/y8v8opmWHk