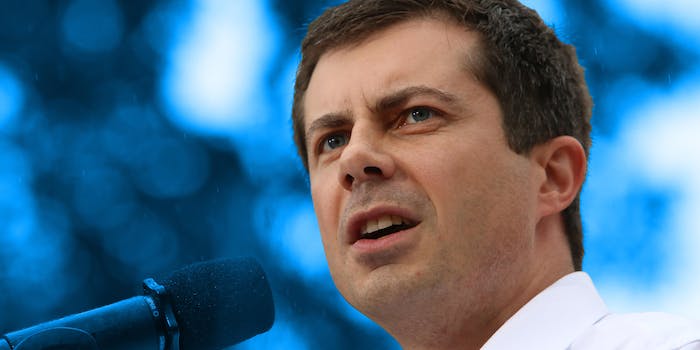 South Bend Mayor Pete Buttigieg’s staff does a lot of fighting online. This isn’t, in itself, unusual: in the past few weeks, Mayor Pete has crept up in the polls and faced a renewed wave of scrutiny over his work for McKinsey and Company and public flip-flops around issues like Medicare for All.

As his staff engaged, many of the fights got personal, like this one between leftist writer David Klion and Lis Smith, Buttigieg’s senior communications advisor:

You worked to engineer GOP control of the NY state senate, which blocked progressive laws from passing here for years until we overthrew your guys. You’re a hack, and your presence on this campaign is a bigger indictment of Mayor Pete than anything his critics could come up with.

You retweeted a disgustingly racist thread about our traveling press secretary @ninasophia81– a friend, a colleague, and one of @PeteButtigieg’s most trusted advisors. If you think you are going to lecture anyone here after posting that, then you are deeply mistaken. pic.twitter.com/zS9tm4p3k6

The specifics of these arguments are interesting—this one, for instance, touches both on Buttigieg’s well-documented lack of support with black voters and Smith’s personal record of working with the entrenched centrist wing of the Democratic party—but taken together, they beg a larger question: what does a presidential campaign get from being Mad Online?

“Being aggressive is often a way to be interesting—either to get attention or distract it away,” Macon Phillips, a political consultant and former Director of New Media in the Obama White House said in an email. “It all depends on the situation.”

It’s not just Team Pete: at earlier moments in the race, Kamala Harris’s #KHive was more than willing to dish it out online, Tulsi Gabbard’s sister tried to start a fight with MSNBC while her candidate was still onstage in the June debate. Bernie Sanders has plenty of Twitter-war veterans on staff, including surrogates like Nina Turner and staffers David Sirota and Briahna Joy Gray. The campaigns fight because that’s what they’re supposed to do, but also because the new environment of 2019 social media has made turning the other cheek largely a losing strategy.

David Goldstein, the founder of Tovo Labs, a digital consultancy firm, said that some of this infighting is particularly brutal in primary campaigns, because the differences between candidates is often relatively slim.

Buttigieg’s involvement with McKinsey, for instance, started out as a frequently-lobbed bomb from left-wing Twitter users, serving as a bellwether for Buttigieg’s perceived amorality and as evidence for a popular theory that he’d served in the CIA.

As Smith and the rest of the team responded aggressively to these charges, the story garnered more and more media attention, culminating in a lengthy piece by reporter Isaac Edward-Dovere in the Atlantic, in which Buttigieg, freed from his McKinsey non-disclosure agreement, explained most of the work he did for the company. Team Pete declared victory, though the interview left plenty of space for his detractors to emphasize the destructive role McKinsey’s work has played worldwide.

Goldstein said that all of the online drama is also a way that campaigns try to “work the refs.” “They [communications staffers] want the journalists who are writing about them to pick up negative narratives about their rivals and positive narratives about their candidates,” Goldstein said. Online spats can be spun either way, and often “helps reinforce something they very much want to make a thing,” which can then be leveraged “into an attack to get voters to question whether or not this candidate really exhibits the values that they want in their next president.”

Here’s a great example of Elizabeth Warren doing that to Pete, and Smith once again firing back.

If @ewarren wants to have a debate about transparency, she can start by opening up the doors to the decades of tax returns she’s hiding from her work as a corporate lawyer- often defending the types of corporate bad actors she now denounces. https://t.co/3nGZc7Dzhj

Phillips, the former Obama official, said that the fights are less interesting to him than the larger movements candidates build online. Twitter is a perfect platform to test that organizing—anyone can chime in, while likes and retweets give a highly unscientific rubric to score whose punches are landing. Supporters networks, too, will amplify differences between candidates and keep news cycles going, an effect that Phillips said is particularly pronounced when a campaign gets aggressive.

“Any political staffer worth their salt knows that when they consider “going negative,” often they just need to start a sentence and let others finish it,” Phillips said. “Social media just makes that easier. All the more reason that the very people who lament the vitriol and confusion consider their own contributions to this chaos.”

That chaos, however, does do one thing for a candidate: it keeps them in the news, securing them “earned media,” or headlines based on a campaign’s actions. This has been Smith’s strategy from the beginning, of course—and staying mad online only helps that.

The Buttigieg campaign said that Twitter was only one part of their communications strategy, and kept well clear of emphasizing their various spats online.

“We’re not focused on the small echo chamber of Washington insiders talking to each other on Twitter, we’re focused on talking to voters about the issues that matter most to voters,” Buttigieg’s press secretary, Chris Meagher said in a statement.

Still, communications experts say that the strategy is pretty clear: if Team Pete gets into a beef with Elizabeth Warren, an objectively more qualified and better-polling candidate, that’s only good. If his staffers seem not-so-chill about it online, it doesn’t matter. All press is good press, and therefore all fights are good fights.

We appreciate the publicity. We all know how instrumental our “go everywhere” earned media strategy was. We can now check Jacobin off the list! https://t.co/4LajcgiM2u

“Any time you can create a tweet or a comment memorable enough that it gets into an article or coverage, you’re increasing that amount of earned media,” Goldstein said. “Trump proved how beneficial that can be to a campaign.”

The specter hanging over all of this, of course, is the pioneer of modern politics always mad, always online ethos: Donald Trump. “Democratic voters are terrified that whoever we nominate is not going to be able to go into the octagon with Trump, that they’ll get beat up smashed around laid into,” Goldstein said. Fighting online, therefore, “is a way for them to show off to a lot of the opinion-makers on the democratic side that they can hang in there punch for punch.”

It’s unclear, though, how much Twitter itself plays into this. “I’m not sure any of this has been proven out with voters themselves,” Goldstein said. “I’m not sure that anyone has found that voters are like ‘wow they really tweeted… powerfully.’”

Hillary Clinton has famously fiery surrogates in 2016, but it’s unlikely that was the only thing carrying her to a primary victory.  Rather, the tweets make a narrative, which gets reflected in the press.

If someone has a combative staff, they may get known as more of a pugilist in the media, which shores up that intangible idea that they’d be able to beat Trump in the fight to come. Joe Biden famously skipped the digital middlemen and joked about physically fighting Trump in 2018—a move that honestly wasn’t a bad idea. But until we get federally-sanctioned presidential boxing bouts, we’ll all have to settle for sparring online.