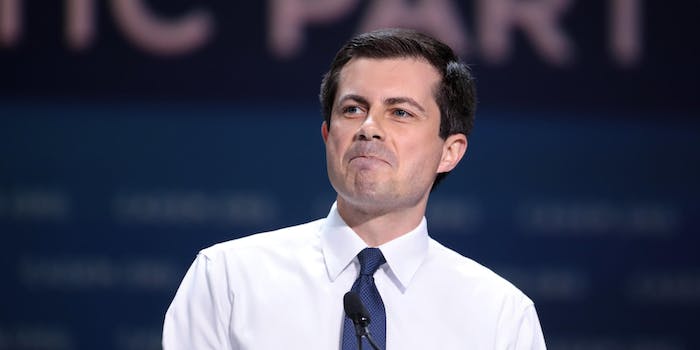 People pointed out a lot of important things happened in the 1960s.

Pete Buttigieg, the former mayor of South Bend, Indiana and 2020 Democratic presidential hopeful, is taking flak online for a tweet, which he eventually deleted, where he criticized Sen. Bernie Sanders (I-Vt.) for having “nostalgia for the revolutionary politics of the 1960s.”

During the debate, several Democratic presidential hopefuls pushed Sanders on his past remarks about Cuba—which led to Buttigieg saying pretty much the same thing he said in his tweet.

“I am not looking forward to a scenario where it comes down to Donald Trump with his nostalgia for the social order of the 1950s and Bernie Sanders with a nostalgia for the revolutionary politics of the 1960s,” the former mayor said during the debate. “This is not about what coups were happening in the 1970s or ’80s, this is about the future. This is about 2020. We are not going to survive, or succeed, and we’re certainly not going to win by reliving the Cold War. We’re not going to win these critical, critical House and Senate races if people in those races have to explain why the nominee of the Democratic party is telling people to look at the bright side of the Castro regime. We’ve got to be a lot smarter about this and look to the future.”

While it appears Buttigieg was trying to link Sanders to his remarks about certain regimes, his quip about “revolutionary politics” in the 1960s led many people to point out that a number of major events occurred during that time including the push for Civil Rights, the Stonewall Riot in 1969, and second-wave feminism

While Buttigieg may have deleted the tweet, the sentiment of what he said at the debate seems to have been liked by his campaign. Senior Adviser Lis Smith retweeted a Washington Post columnist who praised Buttigieg’s remarks during the debate.