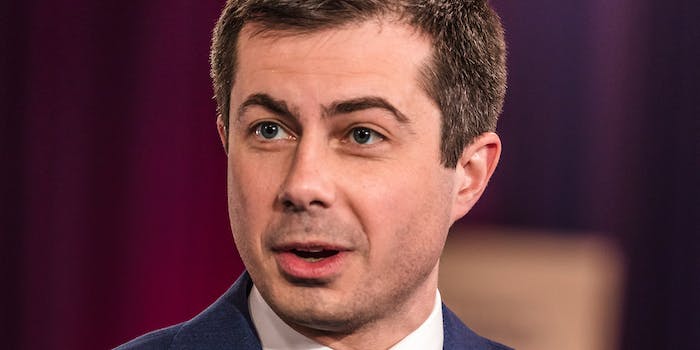 Earlier in on the primary season, as candidates of color dropped out, and a couple of white men surged to the top, former Vice President Joe Biden pledged during a debate to pick a woman candidate for his running mate.

And that has been the framework through which everyone has processed and analyzed his choice. Could it be Sen. Kamala Harris (D-Calif.), or Susan Rice, or even, at one point, Sen. Amy Klobuchar (D-Minn.)?

But what if… Biden didn’t. After all, politicians go back on their word all the time. Whether reneging on his pledge would hurt him, or look bad is one thing, but there’s nothing physically stopping him from doing so.

And so a private jet last night out of South Bend, Indiana got everyone on Twitter abuzz at the possibility. What if Biden picks Pete Buttigieg for vice president? (Team Buttigieg denies that Buttigieg is a VP finalist.)

There was no more information other than that. No passenger manifest or shots of the diminutive former Indiana mayor disembarking down the gangway.

But with news that Biden’s VP pick is “imminent“—and with Buttigieg’s less-than-stellar reputation among the online sect—Twitter users lost it at the possibility of Biden going back on his promise to pick, of all people, Buttigieg.

Biden surveying every single of the most powerful liberal women in America and settling on a young centrist guy as his top choice would just be the kind of groan-inducing turn of events left-wing Democrats have come to expect in recent party history. But alas, Buttigieg’s team denied it.

“I know a lot of people had high hopes, but can confirm this plane was not for our favorite South Bend resident…” wrote Sean Seavett, Buttigieg’s former rapid response director.

Unless he was told to keep it a secret until the announcement came.