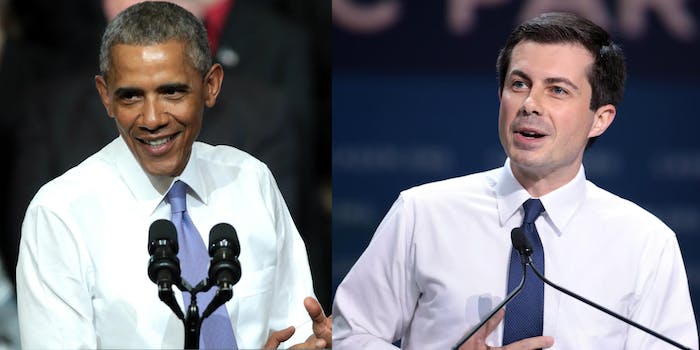 The tweet was part of the Democratic presidential candidate’s thread, in which he tried to gain momentum and donations ahead of Super Tuesday on March 3. With 60% of the precincts reporting, Buttigieg came in third in the Nevada caucuses with 15.3% of the vote, just behind Sen. Bernie Sanders (I-Vt.) and former Vice President Joe Biden, who received 46% and 19.6% of the vote, respectively.

Obama’s speech originated in 2008 during his first presidential campaign.

The “fired up, ready to go” chant became a rallying cry among his supporters.

“Pete has been trying out adopting Obama’s style of speaking for a bit now, so clearly plagiarism was just the obvious next step,” Twitter user @lsln__ pointed out.

Many replied with links to Obama’s speech.

Another user memed the tweet, posting a side-by-side of Buttigieg with headphones on and an “Obama Voice” edition of Rosetta Stone.

Buttigieg’s tweet mixes up the saying a bit by exchanging “change” for “light up”–and some thought it was an odd choice of words.

The Daily Dot has reached out to the Buttigieg campaign.