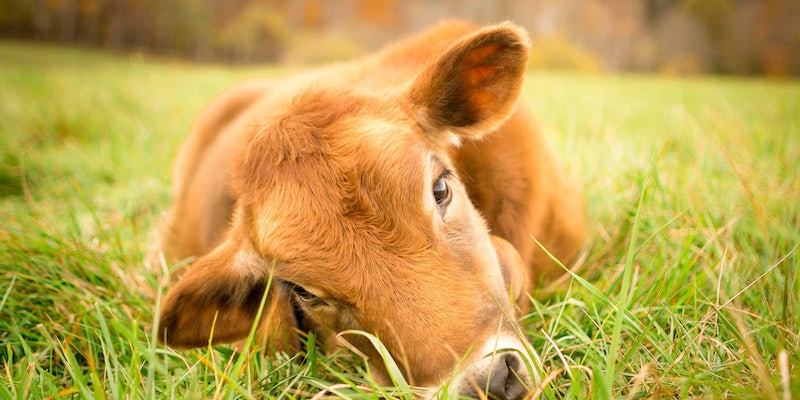 What if Y'all Qaeda gave up cattle ranching and grew soybeans instead?

The animal rights organization PETA (People for the Ethical Treatment of Animals) visited the Malheur National Wildlife Refuge on Wednesday and delivered vegan snacks to the armed militia men who took over the building in early January.

The Oregon militia, which the Internet quickly dubbed Y’all Qaeda, put out a call for supplies via a Facebook post. Jon Ritzheimer, the militia member who wrote the post, is known to law enforcement authorities as an anti-Islam protestor who once shot holes in a copy of the Koran as well as an armed extremist who frequently set off FBI alarms in multiple states.

But even domestic terrorists get hungry sometimes.

“Cold weather socks, snacks, energy drinks, equipment for cold weather, snow camo, gear” was the list that Ritzheimer posted to Facebook in a request that supporters arrive with supplies.

PETA quickly sent an envoy to deliver a crate of vegan jerky, explaining it was an attempt to convince the militia members—some of whom are cattle ranchers—to raise crops instead of cows for slaughter.

The Daily Dot spoke with PETA’s associate director of campaigns, Lindsay Rajt, who traveled to Oregon with “hundreds of packets” of vegan jerky to hand out. The snacks were made by Stonewall’s Jerquee and Primal Strips, two jerky products made with soy, gluten, and shiitake mushrooms in lieu of meat.

“None of them had ever tried such a thing before,” Rajt told the Daily Dot. “One man described himself as a die-hard carnivore and told me he thought it tasted like salmon.”

In photos, Rajt and a colleague can be seen approaching the Oregon militia on icy ground, purportedly asking them to quit cattle ranching in favor of gentle, more animal-friendly areas of agriculture. The ranchers, possibly starving from the aforementioned lack of snacks, seem to be enjoying the faux meat jerky.

Rajt told the Daily Dot that the PETA ambassadors eventually met with Ammon Bundy, unofficial leader of the occupation and son of libertarian icon Cliven Bundy.

“I said to him that we hope they would also consider our request to get out of the animal agriculture business. I think he was a little surprised,” said Rajt. “He said something to the effect that he’s not sure what he would do instead. I suggested that he could maybe grow crops instead of animals for slaughter.”

PETA is no stranger to controversy or to trolling so hard that the Internet can’t always tell the actual group apart from online PETA parody accounts. Not surprisingly, PETA is getting major flak on social media for giving food to Y’all Qaeda.

When the organization announced its trip to Eastern Oregon on Twitter Wednesday, followers pretty much lost it.

“The militant ranchers have appealed for snacks & PETA is bringing vegan jerky—beef w/o cholesterol, cruelty, or environmental destruction,” read PETA’s followup tweets. “The militia members should learn to raise crops, not cows—allowing the refuge’s wild animals to thrive & sparing cattle their lives.”

Almost all of responses to those tweets decried the move as pandering to terrorists.

.@peta is completely missing the mark delivering #vegan supplies to terrorists. Unless their goal is promoting themselves at any cost. #fail

@peta No. You're not supposed to help terrorists. You realize what your aligning with, yes?

PETA meets the OR armed ranchers. Probably one of their tougher sales jobs. pic.twitter.com/axsNwFJHZ3

But Rajt explained that she and her colleague were there simply to change minds about animal rights and in no way do they support the militia’s goals. “These ranchers aim to exploit this national refuge for their personal gain. They want to kill the animals there,” she said, continuing:

“It’s ironic that they are waving around the Constitution in defense of this plan. Ultimately, this land belongs to the people of the United States. And when you’re doing something like that, you aren’t being a patriot—you’re being an armed bully with no respect for anyone’s needs but your own.”

The PETA envoy had pleasant personal interactions with the militia men on the ground in Oregon, but Rajt was clear about her mission: to try to halt the abuse and killing of animals for food and profit.

“It’s interesting to me to hear some of the rhetoric coming out of this camp about tyranny and government,” said Rajt. “But when you think about it there’s nothing more tyrannical than the slaughter of animals for food.”