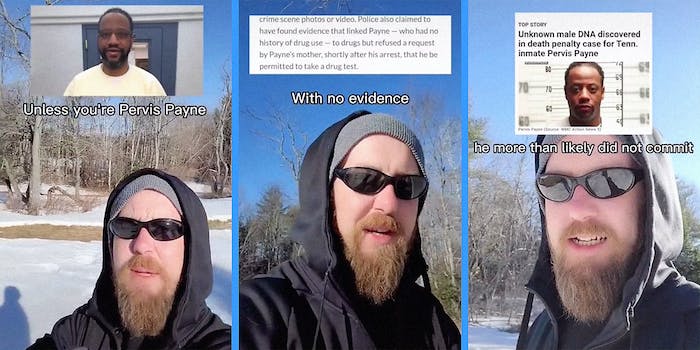 It's being called a 'modern day lynching.'

Videos are circulating under the #justiceforpervis tag on TikTok to raise awareness of Pervis Payne’s innocence, a man who is scheduled to be executed on April 9 by the state of Tennessee.

Payne has been on death row for 32 years for the murder of Charisse Christopher and her two-year-old daughter in June 1987. His execution was originally scheduled for Dec. 3, 2020, but Payne was granted a reprieve in November by Gov. Bill Lee (R) due to disruptions from the coronavirus pandemic.

People online are highlighting the racial stereotypes used to convict Payne, the unconstitutionality of his execution due to his intellectual disability, and a lack of DNA testing in the case.

TikTok user @positiveaf made a video detailing Payne’s case with a call to action for people to use social media to bring awareness and demand clemency for Payne. The TikTok has more than 1 million views and more than 430,000 likes.

“In this country, they’ll tell you you’re innocent until proven guilty,” he says in the video. “Unless you’re Pervis Payne, then you’re guilty with proof of innocence.”

In the video, the TikToker goes on to explain that Pervis had no prior criminal record or history of drug use and that the state lost evidence, including the victim’s fingernail clippings, and opposed DNA testing.

The Innocence Project, an organization that works to exonerate those wrongfully convicted, put out a statement with Payne’s legal team on DNA testing results that support his innocence. Male DNA from an unidentified third party was found on the murder weapon, but the state has yet to identify an alternate suspect, partly due to missing evidence.

“[The] results make crystal clear that it would be a gross miscarriage of justice for Tennessee to execute Pervis Payne,” the statement from January reads.

Payne’s trial took place in Shelby County, a county with one the highest-rates of lynchings of African Americans in U.S. history.

“Shelby, Tennessee has a history and if they can’t have strange fruit, they’ll put your ass in the chair,” @positiveaf says.

During his trial, Payne was portrayed as a drug-using, aggressive, hypersexual Black man, racial stereotypes that have been historically used to wrongfully convict and criminalize Black men in America.

“April 9, they’re gonna proceed with a modern day lynching. They’re gonna put him to death,” the man says. “All over social media, we need to use the hashtags #pervispayne #justiceforpervis.”

#justiceforpervis now has more than 2 million views on TikTok and people on Twitter are protesting his execution and sharing information with phone numbers to call and ask for clemency.

“An innocent Black man on death row…Of all things that go viral, this should be one!” tweeted @PlantBaeJu.

A Change.org petition demanding Payne be taken off death row currently has more than 150,000 signatures and people online are continually trying to get hashtags trending.

“Fight for Black people, but not last minute,” @nihachv tweeted.