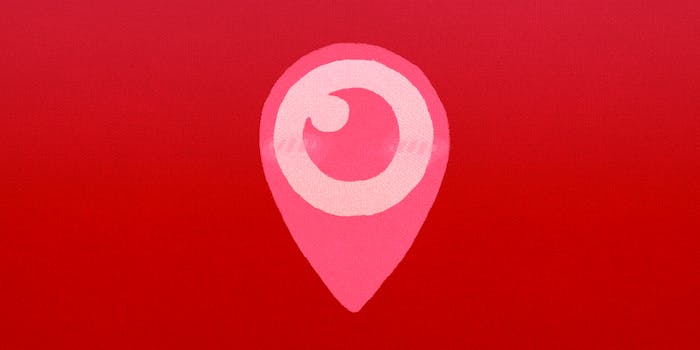 Peniscope is coming and it wants to livestream your sex life

Meet the NSFW version of Periscope.

Wherever there’s a popular new app launch, there are a dozen knockoff apps hungrily behind it—and one of them will be dedicated to helping users post photos of their private parts. Peniscope.tv, a new service in beta, decided to combine the best of both worlds by serving as a pornographic alternative to the streaming app Periscope.

I first learned about Peniscope the day before April Fool’s, when I received a pitch email with the following subject line:

Judging by the number of derisive tweets from other journalists in my feed, I was not the only one to receive this pitch. But because I’d received it the day before April Fool’s Day, I figured it was one of the many hoaxes brands like to play on journalists, and thought little of it.

As it turns out, Peniscope.tv is very real

Or so says its Lyon, France-based CFO, who goes by the piquant pseudonym Thomas Schlong. (“Schlong,” he says, is actually an Americanized version of his real surname, a French slang term for “penis.”) His team is working on an NSFW version of Periscope, aimed exclusively at exhibitionists and couples who want to stream their sex lives.

“Nudity in general is something that’s emerging on a lot of social platforms,” Schlong says, in what is perhaps the greatest understatement of the century. “On Snapchat, for instance, the amount of nudity is quite significant. Short-lived content that is ephemeral is also an emerging trend in all communications.”

Although the team was working on a streaming video platform for amateurs prior to the development of Periscope, they decided to adopt the name Peniscope as a way to “highjack the news cycle a bit.” (Similar pornographic knockoff app forebears like Pinsex and Pornostagram, now Uplust, did the same, though if the history of these apps is any indication, it’s likely that lawyers will be on Peniscope’s tail soon.)

Like Periscope and its competitor Meerkat, Peniscope is intended as a free live-streaming platform. The only difference is that instead of streaming, say, a seder or someone’s pet doing wacky tricks, Peniscope is intended exclusively for amateurs and exhibitionists to showcase their bathing suit parts, whether solo or with a friend.

Of course, given that there are already tons of reports of penis-wagging and nipple-flashing on Periscope (which bans explicit content in theory, if not in practice), what, exactly, is the purpose of downloading another app that’ll provide the exact same service, albeit one with a stupider name?

Although Schlong offers a utopian vision of consensual flashing and fucking without fear of prudish moms reporting on the action, it’s also clear that much of the NSFW content that already exists on Periscope doesn’t fall into that category. Although Periscope has only been live since March, there are already numerous reports of female users receiving unwanted sexual comments and outright harassment, despite the fact that their streams were not sexual in nature. There are also already concerns that minors will fall prey to sexual predators on the livestreaming app, as has been the case with Snapchat and Chatroulette.

Whether offering a “safe space” for those interested in broadcasting sexual content will serve to weed out actual sexual harassment on Periscope remains to be seen. But judging by the vague age restrictions and screening processes Schlong says Peniscope plans to adopt (it plans to verify users’ ages by requiring a social media sign-in, a la Snapchat) it’s clear that it’ll likely be about as effective as its SFW counterpart at preventing unwanted abuse of a sexual nature. Which is to say, not very.

While there’s a precedent for social networks devoted exclusively to amateur sexting (the aforementioned sites are good examples, as are the Tinder and Facebook knockoffs Mixxxer and Fuckbook) most have fallen by the wayside due to lack of interest from the general population, or have been victim to the influx of porny spam.

But privacy concerns or no privacy concerns, Schlong says you’d be surprised how many people want to broadcast their most intimate moments. There are 300 people signed up on the waiting list (surprise: More than 75 percent are male) and before rebranding as Peniscope, the startup sent a questionnaire to 500 people in Europe to gauge interest in the concept of the app. Nearly 17 percent of people surveyed were couples who said they’d be interested in livestreaming their sex lives.

Guess there’ll be more than a few flashers migrating from Periscope to Peniscope after all.