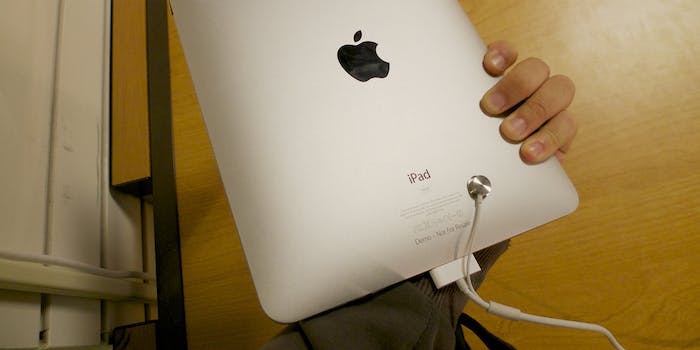 Apple won’t let you engrave ‘vagina’ on an iPad, but ‘penis’ is totally cool

Lots of people engrave their names and addresses on their iPads, just in case they get lost. But what if you’d like to personalize it further by engraving the name of, say, your favorite reproductive organ on it? Well, that all depends on whether you’re packing the bun, or the hot dog, so to speak.

According to feminist blogger Justyn Hintze, Apple has an interesting policy when it comes to what they will and won’t engrave on your iPad. Apparently, while the word “penis” is kosher, the word “vagina” is not. Geez, guys, double standard much?

Hintze discovered Apple’s policy earlier this week, when she bought a new iPad and decided to take advantage of Apple’s free shipping/free engraving policy. But when she typed in a quote from her favorite poem by spoken word artist Alix Olson—”I’ll give myself a lube job, shake my broomstick til my clit throbs”—she received a message to call Apple based on her usage of “inappropriate language.”

In Apple’s defense, the Olson quote is fairly explicit, and it makes sense why the notoriously adult content-shy company would want to prevent consumers from inscribing  pornographic language on their devices. But judging by the “inappropriate language” alert, Apple objected less to the general content of the quote than to the inclusion of the word “clit”—an abbreviated version of a clinical term used to describe a part of the female anatomy. 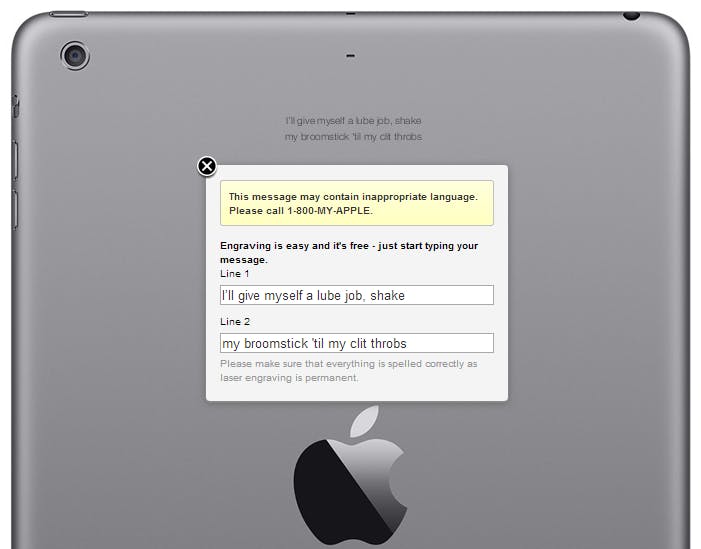 Frustrated, Hyntze typed in the word “vagina,” receiving the same “inappropriate language” alert. On a hunch, she decided to try “penis” and “dick” to see if they would pass muster with Apple. They did. 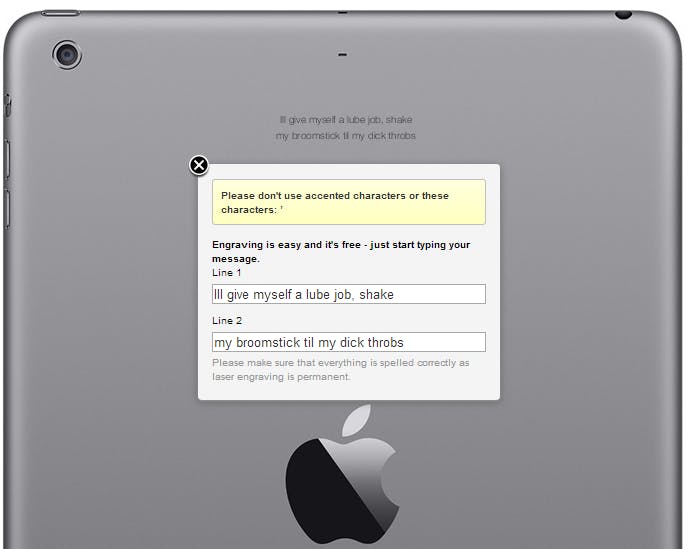 So why did Apple allow Hyntze to engrave “penis” on her iPad and not “vagina”? Hyntze suspects it’s because the company is “entrenched with sexism and misogyny, and frankly, is terrified of women’s bodies and women’s pleasure.” A customer service rep for Apple apparently agrees with that assessment: When Hyntze contacted Apple to complain, the rep “explicitly noted the sexism, but said there was nothing she could do.”

But actually, there is something you can do, Apple. You can not treat the vagina as something that’s vulgar and “dirty,” and give it the equal weight and respect you do the male anatomy by changing your iPad engraving editorial standards. Or alternatively, you can just let people put whatever the hell they want on their iPads. Up to you, Apple. The ball—or clit, in this case—is in your court.