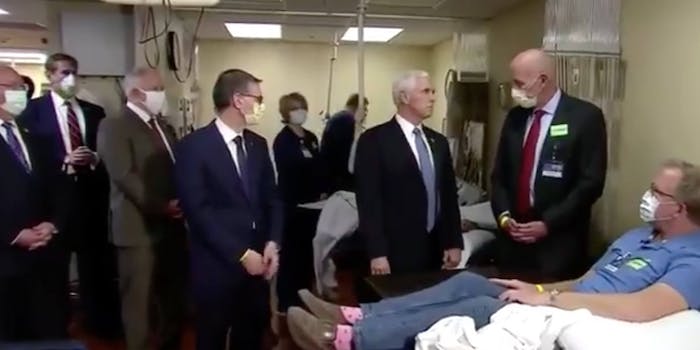 Pence refuses to wear mask while visiting a health clinic

Vice President Mike Pence stirred controversy on Tuesday after seemingly refusing to wear a mask while visiting a medical facility in Minnesota.

While touring the Mayo Clinic in Rochester, Pence was seen without any facial covering despite the center’s strict policy regarding masks aimed at limiting the spread of the coronavirus.

“All patients, visitors and staff are required to wear a mask to decrease the risk of COVID-19 exposure,” the clinic’s website states.

But as was seen in footage from the clinic, Pence appeared to be the only individual who declined to adhere to the guidance.

“Mayo Clinic had informed @VP of the masking policy prior to his arrival today,” the clinic tweeted.

The tweet, however, was deleted soon after without explanation.

At a press conference with Mayo Clinic staff shortly after, Pence was once again the only individual in the room without his face covered.

It remains uncertain as to why the vice president felt it necessary to ignore the Mayo Clinic’s policy. While some have speculated that Pence is doing so in an effort to downplay the seriousness of the disease, the vice president has not publicly commented on his reasoning.

It should also be noted that Pence is the head of the White House Coronavirus Task Force, which has called on all Americans to wear masks in public. The Centers for Disease Control (CDC) has also recommended wearing masks in order to protect vulnerable members of the population.

More than 1 million cases of the coronavirus have been confirmed in the U.S. so far, with over 56,500 deaths attributed to the disease.