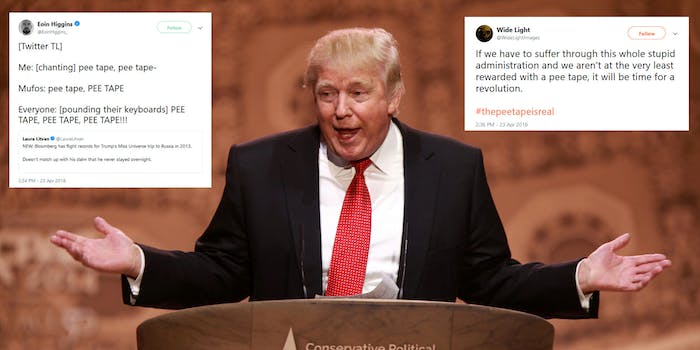 'Trust and believe, the pee tape is real.'

It’s been a busy couple weeks for people hoping that the “pee tape” is real.

Between former FBI Director James Comey speaking about the pee tape on live television and the “golden showers thing” making several cameos in his recently-released memos, it felt like the tape, which allegedly shows now-President Donald Trump paying prostitutes to pee on a bed in a Russian hotel, was front-and-center in everyone’s mind.

Now the internet feels there may be more smoke surrounding the existence of the tape after Bloomberg reported on Monday that flight records show that Trump stayed overnight in the hotel before his Miss Universe pageant in 2013.

This is significant because, as Bloomberg notes, Trump has insisted that the salacious parts of the Christopher Steele dossier, where the pee tape was first mentioned, was false because he never spent the night in Russia during the trip.

(Trump has also denied it on the basis of being a germaphobe.)

In Comey’s memos, the former FBI director says Trump told him he “arrived in the morning, did events, then showered and dressed for the pageant at the hotel (he didn’t say the hotel name), and left for the pageant. Afterwards, he returned only to get his things because they departed for New York by plane that same night.”

However, Bloomberg’s report seems to contradict some of Trump’s denial of staying overnight in Moscow, making Twitter jump immediately to the pee tape.

jokes aside, I would say there is a roughly 52% chance the pee tape is not real. I am technically lean-no on this debate… it is pretty awesome that that is the level of confidence I am willing to commit to tho

The Case Of The Missing Russian Pee Pee Tape Solved…

MUELLER: Sir, we have the tape. It's over.

TRUMP: Dang! I would've gotten away with too…if it weren't for those meddling flight records! pic.twitter.com/bl5LalFrsE

If we have to suffer through this whole stupid administration and we aren't at the very least rewarded with a pee tape, it will be time for a revolution.#thepeetapeisreal

Trump was in Moscow just like Steele said he was.

We are approaching 90% chance the "pee tape" actually exists.

Did it all really happen? The collusion? The pee tape? pic.twitter.com/wnEwl0L2Ze

Trust and believe, the pee tape is real. https://t.co/0S1Qta4Y7j