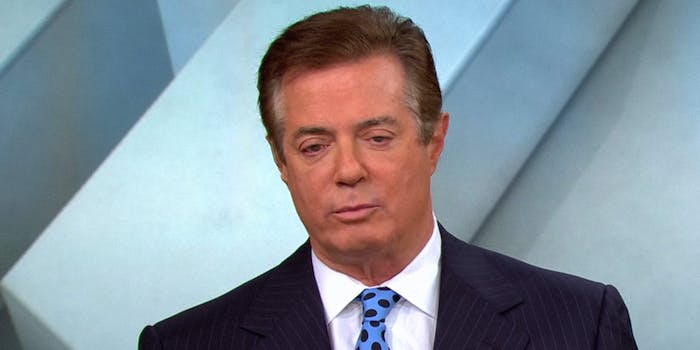 Paul Manafort volunteers to meet with Congress over Russia ties

President Donald Trump’s former campaign chairman Paul Manafort will voluntarily appear before the House Intelligence Committee, as part of its investigation into Russia’s interference in the 2016 presidential election.

Committee Chairman Devin Nunes (R-Cali.) made the announcement at a press conference on Friday. Manafort who served as Trump campaign chairman until August, when his consultancy work for pro-Kremlin politicians in Ukraine was uncovered, had his name thrust back into the spotlight by an Associated Press report this week which revealed more about his eastern European business dealings.

The AP discovered a contract between Manafort and billionaire Russian oligarch Oleg Deripaska worth $10 million per year. Manafort, according to the AP, was being paid to strategically peddle pro-Putin propaganda to former Soviet republics in a deal that lasted for three years, from 2006 to 2009. The ultimate aim of the strategy, according to memos unearthed by the AP, was advancing pro-Russian politicians in those countries and undermining opposition politicians.

Since being forced to resign from Trump’s campaign in 2016, Manafort has consistently denied working to advance Russian interests.

When contacted by the AP, he confirmed he had worked for Deripaska, but said that the report mischaracterized their relationship, and that his work in no way supported a pro-Russian agenda.

In recent days, the White House has distanced itself from the former campaign member, with Press Secretary Sean Spicer telling reporters: “It would be inappropriate for us to comment on a person who is not a White House employee.” Earlier, Spicer said Manafort had a “limited role” with the campaign.

Manafort’s coming forward for a hearing at the House Intelligence Committee will peak interest now that FBI Director James Comey confirmed the existence of a bureau investigation into election interference. That probe, Comey said, would look at Trump campaign ties to Russia to assess whether particular individuals coordinated with the Kremlin.

During Friday’s press conference, Nunes also said that he did not expect to receive information from the NSA before next week, regarding his recent claim that Trump associates’ communications were swept up in surveillance. He also said that the committee was recalling Comey and NSA director Michael Rogers for a closed hearing session to ask further questions about ongoing investigations into Russia.

Watch the press conference in full below: