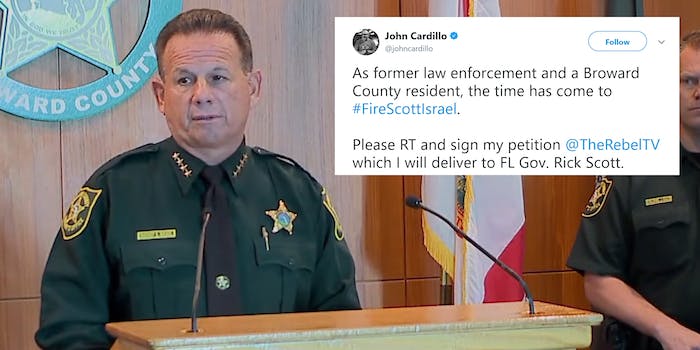 Conservatives have found another scapegoat for the Parkland shooting

The movement is afoot.

In the aftermath of the school shooting in Parkland, Florida, that left 17 dead, calls for gun legislation have been louder than ever. And as that movement has swept the nation, conservatives have searched for scapegoats that aren’t semi-automatic rifles.

The latest is Broward County Sheriff Scott Israel, who led the police response to the shooting.

The Florida Speaker of the House sent a letter co-signed by 73 Republicans that called on Florida Gov. Rick Scott to suspend Israel for “malfeasance, misfeasance, neglect of duty [or] incompetence,” detailing the signs the police missed and ignored from shooter Nikolas Cruz, including being aware of an Instagram Cruz posted saying he would shoot up a school.

Today I sent the following letter to @FLGovScott Asking that he suspend Broward County Sheriff Scott Israel for incompetence and dereliction of duty. I was honored to be joined by 73 Republican colleagues. You can read the letter attached here. pic.twitter.com/exZVwGQ3DR

Those same House representatives, days earlier, voted down a motion to open debate on a bill that would ban assault weapons.

Israel has drawn further anger for his response to the report that the School Resource Officer (SRO) did not engage with Cruz during the shooting.

Broward’s deflection of responsibility enraged conservatives, who were already upset about the FBI’s response to a tip about Cruz that was not passed along—putting the blame on law enforcement officers for the shooting.

Broward County Sheriff Scott Israel will not resign following #Parkland shooting. @dbongino reacts on @foxandfriends: “The sheriff has to go. He has to resign. I don’t see any way he can credibly function in that role anymore.” pic.twitter.com/Ogu9nxh8bQ

#BrowardSheriff is a shame to Broward county, Floridians, America, and all our brave police & armed forces. Unaccountable, reckless, and dangerous coward.#ResignSheriffIsrael #FireSheriffIsrael

https://t.co/vjX7dblxyl
Sheriff Israel should be F-I-R-E-D! His leadership skills were in full effect as NOT one BUT four deputies under his leadership coward as our children were being killed and the shooter was left UNCHALLENGED! #FireSheriffIsrael

As former law enforcement and a Broward County resident, the time has come to #FireScottIsrael.

Please RT and sign my petition @TheRebelTV which I will deliver to FL Gov. Rick Scott. https://t.co/apxMOLyhhd

In a petition on Rebel TV, a far-right organization that employed notorious troll Jack Posobiec, a petition to fire Israel cited stocking his “inner circle with far left political appointees instead of career law enforcement people” and having ties to the Cuban Mafia.

Israel said he would not resign but would cooperate with an investigation into the department authorized by Scott.