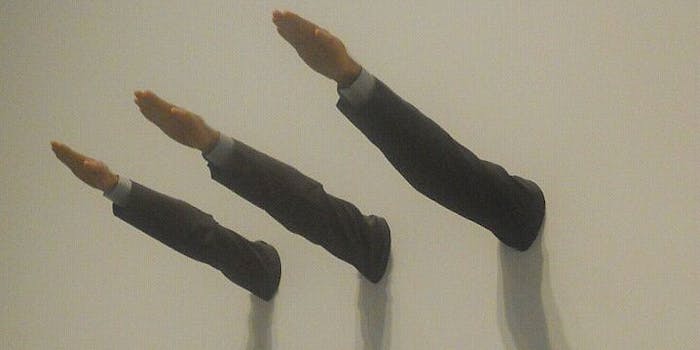 According to one of his peers, Tyler Owens likes to joke around. This time, he wasn't funny.

While the Pace University football team prepares for its Saturday afternoon game vs. Saint Anselm College, it’ll have to do so without one of its team captains. You can blame the scourge of social media.

Well, that and because the defensive captain draped himself with the Confederate flag and struck a Nazi salute, which was distributed on Snapchat with the caption, “The grand wizard.”

If you can stomach the image of Tyler Owens, here it is. 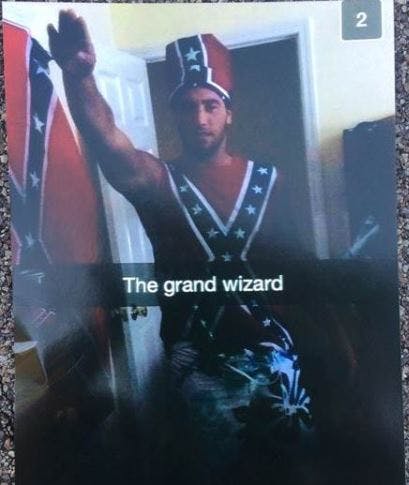 Since the photo came to light, Pace—a Division II school located in Pleasantville, New York—has said Owens will not participate in football activities until a university investigation is completed.

One mystery of this story is how the photo was leaked to Snapchat in the first place. One rumor stated that Owens’ ex-girlfriend was the one to expose him. But Ginger MacDougall, who dated the senior defensive lineman last semester and who apparently was asked by a number of football players if she was the leaker, was emphatic that it was not her.

“I would never do something like this to [Owens] or his team,” MacDougall told the Pace Chronicle. “I would never sabotage anyone’s future or their team this way. I had nothing to do with it…”

MacDougall declined to comment when asked by the paper if Owens had previously showed signs of racism or anti-Semitism.

Reportedly, a group of African-American students and athletes saw the Snapchat, and they sent an email to alert the media.

“As African Americans and Pace University students we are extremely offended and believe something should be done about this,” the email read, according to the Pace Chronicle.

Yet, Owens has at least one defender: a former football player named Addison Casey, who told the Chronicle, “[Owens has] done so much for me. People are taking a joke out of context, it was just a couple of guys messing around, they saw the [clothing], and jokingly put it on.”

As they’ve learned, the joke wasn’t so funny.