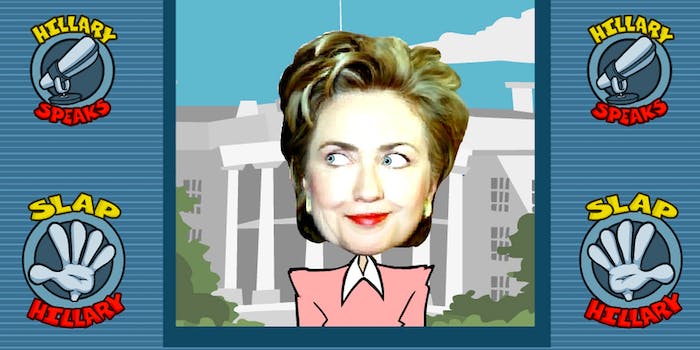 You can also make her dance.

What’s the only thing standing between Hillary Clinton and the White House? According to the website for a “nonpartisan” super PAC called The Hillary Project, that would be … The Hillary Project. Their plan to prevent a Clinton presidency boils down to an unrelenting assault on her image—and toward that end, apparently, they’re offering cheap Flash games in which you can slap the potential candidate or beat her up as Barack Obama. You can even make her dance.

“Game” is maybe not the word. Games, as we understand them, usually have clear objectives, challenges, and levels, if not narratives and world-building. The first entry, designed by “The SlapHillary Team”—wonder what else they’re working on?—has but two commands. You can elect “Slap” to give Clinton a meaty thwack across the face, rendering her a googly-eyed bobblehead. You can also choose to hear her “Speak,” and then slap her when she does.

Then there’s “Dancing Hillary,” a herky-jerky figure you can set against various club backgrounds as you cycle through a set of “Funky Moves.” A speech bubble reads, “I just want to be President!” It’s unclear whether her dance floor antics are meant as political commentary or The Hillary Project just thinks dancing is altogether stupid. Either seems plausible. 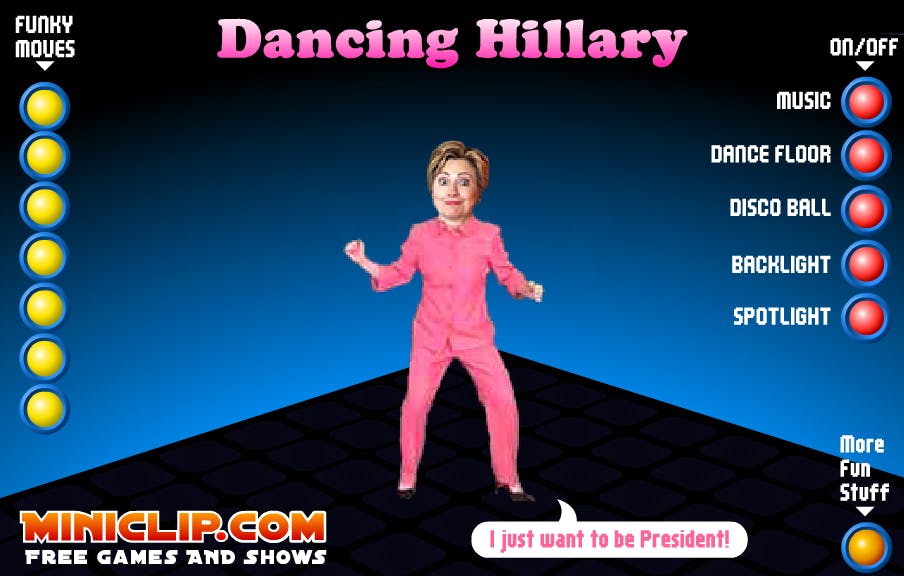 Finally, there’s the most advanced amusement, titled “Street Fight.” The street in question is Pennsylvania Avenue, and perhaps surprisingly, the player can choose to be either Hillary Clinton or Barack Obama in the Mortal Kombat-like battle that follows. This must be the closest the GOP has come to the coherent articulation of a divide-and-conquer strategy in decades.

The PAC’s Twitter account spammed reporters about SlapHillary this week and seemed happy to retweet any mention of it, whether positive or negative. As many pointed out, the game has existed since 2000, which accounts (in part) for its dated quality. 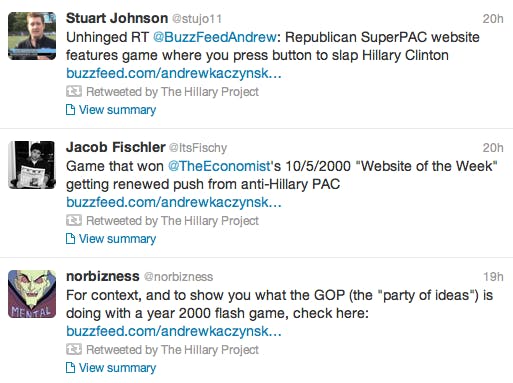 Richard Poe, husband of the game’s creator, Maria Poe, in 2008 described it as “good, clean fun for the whole family—and educational too! Young folks will get a first-hand lesson in civics, by taking part in America’s grand tradition of political satire.” The game had been revived ahead of the 2008 Democratic National Convention, at which, Poe claimed, “do everything in her power to steal the spotlight from poor Barack Obama.”

Yes, it may appear all fun and games, but The Hillary Project has a real agenda, too. They may not have a clue who they’d like to install in the White House—and if they do, they’re not saying, hoping to attract Hillary-hating Democrats to their cause—but at the bottom of their site’s game page, there is an urgent plea: “Slap Hillary for real by signing the petition to stop her from running for president.” FYI, you can’t even read the petition before signing, which is too bad. We have a feeling that’s where the real entertainment is.

Photo via The Hillary Project