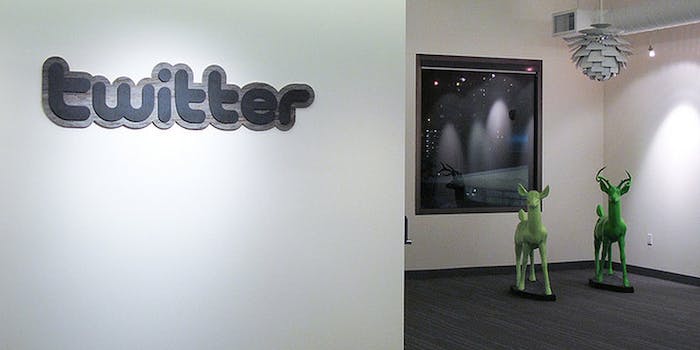 A Twitter employee has been tweeting out the most insane, overprivileged soundbites overheard at Twitter’s San Francisco offices.

What kind of person works at Twitter? Here’s the inside scoop, according to a @NYTFridge-inspired parody account: entitled jerks.

A self-loathing Twitter worker has been tweeting out the most insane, overprivileged soundbites overheard at Twitter’s San Francisco offices on an account called @twentitled, or “Twitter Entitled.”

The account’s description links to a public list of Twitter’s staff, and a real-life Twitter employee claims everything it posts was actually said. Still, the account’s description added the hashtag “#satire” yesterday afternoon. But is it? These people are, generally, wealthy (early employees could sell their shares of the company for $9.9 billion) and they work at a “cool” tech company.

JWZ reported last night that a source inside Twitter said the company’s communications team was “crying a river” over the bad publicity the account was garnering. Seems pretty legit.

#1: I never reach into the snack bins with my bare hands, I send my intern to get me snacks.

#1: They should make a wiki of the times/names for all celeb visits at least a week ahead of time so I don’t get fucked by a WFH again…

#1: the sparkling water machines are not producing enough sparkles!

#1: I have to screen print my own twitter shirt now? What is this, some kind of hipster piggy bank project?

#1: You know, we wouldn’t have issues with broken espresso machines if we still had baristas

And finally, the most meta of them all:

#1: Someone blogged about my Twitter account! #2: Whatever, let me know when it gets on TechCrunch, I’m late for my afternoon massage.