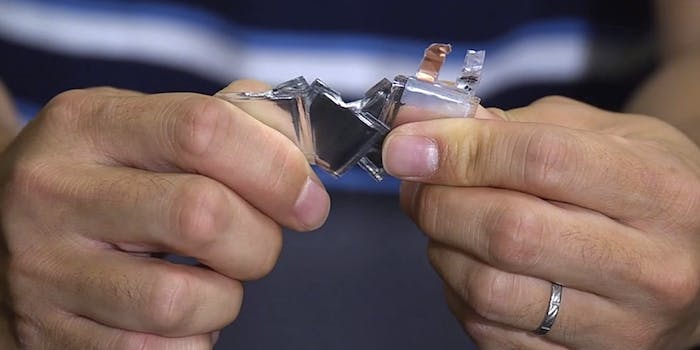 Stretchable batteries blend high-tech power with the art of origami

The ancient art of origami paired with battery technology could be the future of power in wearable devices and clothing. Researchers at Arizona State University have discovered a way to create batteries that stretch to 150% of their original size using this art-based method.

By using kirigami, a variation of origami that’s based on folding and cutting techniques, ASU engineers made a battery that powered a Samsung Gear 2 smartwatch while stretching across the arm.

Similar to a telephone cord that coils and stretches when needed, these batteries have a similar repeating structure that lets them expand or contract based on the movement of the body. The batteries are lithium-ion material, the standard for batteries you might find in mobile devices and wearables.

As wearable devices become more ubiquitous, battery technology still presents an obstacle for designers and engineers who want to make clothing or other devices with discrete batteries that move as people do. But researchers are attempting multiple solutions to fix this problem. In 2014, startup Imprint Energy debuted prototypes of flexible zinc batteries made from 3D-printing.

ASU’s batteries are still in early stages of development, but if the method scales, our wearables could contain tiny, folded, flexible batteries as wearables that move with our body, not just sit on the wrist.