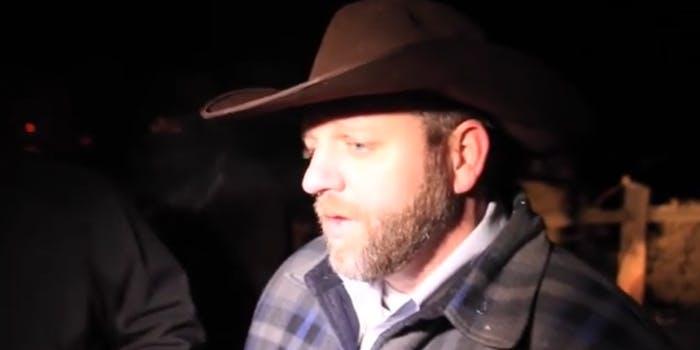 The occupation began on Saturday.

In a public statement, Harney County Sheriff David Ward described the remaining protesters as “outside militants,” confirming that “a collective effort from multiple agencies is currently working on a solution” to the occupation.

The protest was publicized online by Ammon Bundy, the son of Nevada cattle rancher and libertarian icon Cliven Bundy, who is best known for leading an armed standoff against federal agents over his refusal to pay federal grazing fees.

Following in his father’s footsteps, Ammon Bundy called for fellow militia members to join him at the Malheur National Wildlife Refuge to support Oregon ranchers Dwight and Steven Hammond. The father and son were convicted of arson after setting fire to 127 acres of land in 2001, and already served some jail time before a judge ordered them back to jail to complete their five-year sentence.

This precipitated local protests, attracting the attention of militia leaders like Bundy, Blaine Cooper, and Ryan Payne, who provided armed assistance at Cliven Bundy’s standoff in 2014. In a tearful YouTube video posted by Cooper on Dec. 31, a militiaman named Jon Ritzheimer appeared to bid farewell to his family before joining the Oregon protest, saying, “I am 100 percent willing to lay my life down to fight against tyranny in this country.”

In a statement to the Harney County Sheriff, the Hammonds’ lawyer wrote, “Neither Ammon Bundy nor anyone within his group/organization speak for the Hammond Family.”

I talked to Ryan Bundy on the phone again. He said they're willing to kill and be killed if necessary. #OregonUnderAttack

The occupation began on Saturday, after the militia participated in a protest of about 300 people outside the refuge. In an interview posted to the Bundy Ranch Facebook page, Ammon Bundy characterized the Hammond case as a “symptom” of the U.S. government’s tyranny over its citizens. “The people have been abused long enough,” he said, stating his plan to occupy the wildlife refuge building indefinitely.

According to the U.S. Attorney’s Office report of the arson case, “Steven Hammond handed out ‘Strike Anywhere’ matches with instructions that they be lit and dropped on the ground because they were going to ‘light up the whole country on fire.'” The fire was described as an attempt to hide evidence of illegal deer hunting in the area.

On social media, people are discussing the occupation on the hashtag #OregonUnderAttack. Many are comparing the seemingly low-key response to the militiamen with the frequent cases of police brutality against unarmed black protesters elsewhere, indicating a double standard for armed, white protesters who have occupied a federal building.

(To make matters more confusing, both sides of this debate are using the acronym BLM while discussing the occupation. BLM is generally used as the acronym for the Black Lives Matter movement, but the Oregon protesters are more likely to use it when referring to the Bureau of Land Management, the eternal nemesis of activists like the Bundy family.)

Did I miss the call for the national guard in Oregon? I recall them in Ferguson and Baltimore. #OregonUnderAttack

Pay close attention to what mass media decides to cover – and "how" they cover it. It matters #OregonUnderAttack

interesting to see how folks will bend language to describe the militia involved in #OregonUnderAttack. Here's one: white, male, terrorists?

The scene was relatively quiet on Sunday morning, possibly due to the refuge’s remote location. But with Bundy publicly calling for support from likeminded individuals, more people may travel to the occupation in the coming week.