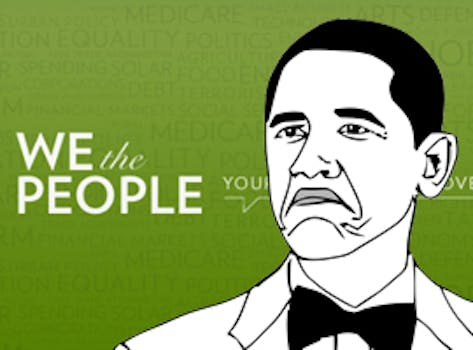 Four years in, the Daily Dot examines the Obama administration's dedication to open government and participation.

A year ago, the White House started a campaign on Twitter with the hashtag #40dollars. It was a signal success. Americans from both sides of the aisle weighed in on what $40 extra in their wallets would mean to them, should the payroll tax cuts be extended. Recently, the Obama administration started another such campaign, called #My2K, devoted to the resolution of the so-called “fiscal cliff.” (The conservative Heritage Foundation, learning from the success of #40dollars, purchased the promoted tweet for #My2K, however, “hijacking” the message, according to the Washington Post.)

These campaigns are examples of the administration’s attempt to increase nationwide interaction between the executive and the citizenry using social media.

On President Barack Obama’s second day in office, Jan. 21, 2009, one of his first actions was to sign a memorandum that laid the groundwork for the eventual adoption of the Open Government Directive (OGD) on transparency and ethics.

In his first White House blog post, then-new media director Macon Phillips outlined the three priorities of the administration when it came to open government: “communication,” “transparency,” and “participation.” In later posts, “communication” was changed to “collaboration.”

How close, four years later, the Obama administration has hewn to these principles deserves an examination. This series will do that, devoting an article to each of those principles.

In the Initiative, Peter Orzag, then-director of the Office of Management and Budget, provided the reasoning for including participation as a major plank of the administration’s policy.

“Participation,” he wrote, “allows members of the public to contribute ideas and expertise so that their government can make policies with the benefit of information that is widely dispersed in society. … To create more informed and effective policies, the Federal Government should promote opportunities for the public to participate throughout the decision-making process.”

The Initiative required government agencies to put into place actions that would further the open government agenda and set deadlines for them to do so. Those actions included:

One of the most public-facing expressions of the participation plank is the We the People petition platform, designed as a way for citizens to directly petition the White House and, by association, the country’s lawmakers. With a minimum of 150 signatures, the petition becomes searchable on the website. With 25,000 signatures, it elicits a response from the White House.

Unfortunately, the petitions which have gotten the most attention are either goofy or inconsequential. Some of those have gotten attention, from the White House and certainly from the media. Some of the more serious ones have gotten little from either.

The latest example of that are the petitions for states to secede from the union, 30 at last count, and a petition to deport those petitioners for secession. Profoundly goofy but attracting enormous attention.

An example of the inconsequential petition (for everyone who isn’t a dedicated beer aficionado) is the one that resulted in the release of the White House’s proprietary beer recipes. And they certainly did respond to a petition demanding it “formally acknowledge an extraterrestrial presence engaging the human race.”

Unfortunately, it has not been as satisfying to those seeking redress or change of arguably more important issues, leading one critic to describe the petition platform as “how to ignore the voters proactively.” (There was even a We the People petition for the White House to take such petitions more seriously.)

An example of one of the more substantive petitions was to insist that the Transportation Security Authority abide by federal court rulings and review its policy of full-body scanning. The petition was later said to have been taken down prior to the time normally allowed for necessary number of signatures to be gathered.

“Opportunities for meaningful participation from the public are hampered when it doesn’t have all the information it needs,” Ginger McCall, director of the Electronic Privacy Information Center, told the Daily Dot. “The body scan issue is just one example. The (TSA) just decided to do it. They didn’t do a ‘notice and comment rule making,’ they just rolled it out, with no information on what it implies.”

Meaningful public participation is dependent, McCall said, on that public being informed, and an informed public is dependant on government transparency, which is lagging.

While We the People may be the most obvious face of open government participation, it is unlikely to be the one people will encounter the most. Those will be the initiatives created by the individual agencies, including the executive branch, allowing greater access to, and interaction with, their data.

Regulations.gov is a place for citizens to comment on changes to federal rules and is run by the notoriously foot-dragging Office of Information and Regulatory Affairs (OIRA).

The Department of Health and Human Services site HealthCare.gov provides a wealth of comparison tools based on government-gathered data. Its HealthData.gov site provides a host of data sets and tthe HHS itself sponsors an Innovation Fellows program.

Although there is a good, if uneven, effort by many agencies to make information available to the public and to solicit public input to changes, McCall said there has been an unfortunate trend by many agencies of closing any public comment period on the same day a rule or change is to go into effect. “Weighing and discussing (public input) takes time, more than, say, 12 hours. There can be no meaningful public comment when you’re just checking off boxes” to show you’re adhering, bureaucratically, to a policy mandate.

The Obama administration has certainly inspired the creation of pathways between government data and citizens. Agencies have been mandated to package and offer data sets and to open their doors to the information they gather and use. Some of those efforts are catalogued above.

That said, its most visible facet, the petition platform We The People, seems to be a catch basin for the goofy and marginal, the human interest and morning show-worthy concerns of a discredited minority. Real concerns, embodied in petitions insisting, for instance, that the government ensure its bureaucracies and agencies abide by court decisions, have been more often given spin than solutions, when they have been given anything at all.

Overall, the Obama administration has set many standards and dropped many balls. As unsatisfying as it might be to credit them with a mixed record, doing so brings the benefit of truth to the discussion.

As Alex Howard, an expert on open government issues for O’Reilly Radar, told the Daily Dot, “The pace of tech change while President Obama has been in office guaranteed that his administration would set a lot of precedents.” He added:

“The big question is whether it added up to success or resulted in failure. Or if there were failures—and often the only way to approach something genuinely new, like the Internet in the 21st century, is to make some mistakes—if they learned from them. The record there is also (you guessed it) mixed.”

In terms of the sucesses, Howard said, “remaking Regulations.gov and making comments on FCC.gov part of the public record are two historic milestones.”

Change in technology, of course, does not necessarily create a change in culture, and the culture of government is not a revolutionary one by and large.

“I understand why many people may feel disappointed,” Howard said. “It was a high bar. Adding a bigger dose of the Internet, social media and open source to government didn’t magically change all of the entrenched issues that existed in Washington, long before the first wifi network or smartphone was seen around the cities boulevards. Then again, I’m not sure everyone realizes how far and fast we’ve come in less than four years.”

McCall believes that things come in cycles and that transparency, participation, and collaboration are no exception. Since September 2001, national security has been such a priority that it has hampered real openness. So while the technology and the culture force a dedication to openness, bureaucratic inertia and fear marshall against it, at least to a degree.

“Eventually people tend to rebel against it,” McCall said. “People realize the important principles are our civil rights and they come to insist on them.”

The distinction may be worth making again that commenting is not the same as participating, and participating is not the same thing as governing. Some might argue we have a government for latter function. Besides, the idea that even optimal open government would put the grubby mitts of the hoi polloi directly on the levers of state seems unrealistic.

But it might also be worthwhile for the governing classes to remember that promising such avenues or participation then delivering on too few of them may eventually drive disappointed citizens to insist the government respond directly to their touch by throwing the politicians out en masse.

All that said, what the administration has done may in the end be much more pervasive than its high-profile, praised, or reviled initiatives. The administration relaunched its website with an emphasis on responsiveness; became active participants in all of the major online social networks and tools such as Twitter, Facebook, and YouTube; and energetically crowdsourced participation in town halls and other events via social networks.

This sense of the White House as being online with the rest of us, and therefore, psychologically to hand, may in the end have a greater effect than any high-profile successes or failures.