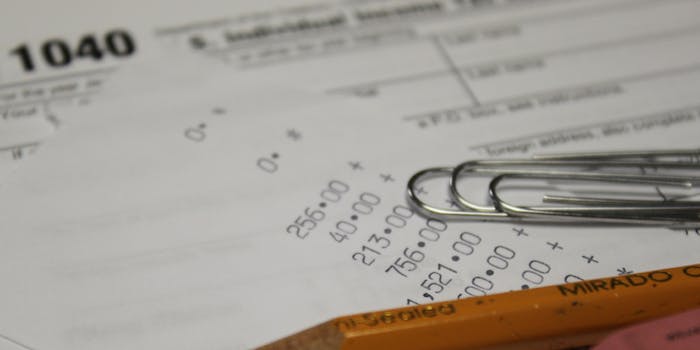 Your digital taxes are big business, but you’ll never see a cent of it

Taxes suck, and you can blame software companies for it.

Now that we’re in the wake of Tax Day and the headache of getting all your numbers straight is behind you, it’s a good time to consider just why U.S. taxes are handled in such an archaic and outdated way. As it turns out, telling the government how much money you made in the past 12 months is actually big business itself, and it’s an industry that is fighting against convenience and simplicity in order to continue existing.

Calculating how much money you owe the government (or that the government owes you) doesn’t have to be as complicated as it is. The government already tracks the financial data of many taxpayers through the filings of their employers and other institutions, but those individuals are still required to file their own versions, hoping that all the numbers match what the IRS already knows. Unless you have a complicated return to file, additional expenses and deductions to include, or a business of your own, filing your individual tax return is a redundant exercise.

Intuit, the company behind the outrageously popular TurboTax software that millions of Americans use to file their taxes, is one of the biggest players in the tax game. The company is fiercely opposed to the idea that everyday citizens don’t actually need to file taxes, and you can guess why: The company’s entire business model is designed around helping you file your return correctly.

To ensure that the government doesn’t do anything that would endanger its very existence, Intuit spends lots and lots of money on lobbyists. As the New York Times reports, the company has dropped a cool $13 million on efforts to both swing government officials to their way of thinking as well as crush programs like California’s Ready Return, which allowed residents to file their state taxes online for free.

Intuit isn’t the only company with a horse in this race. H&R Block has also dramatically ramped up its lobbying in recent years. The company spent just $300,000 on lobbyists in 2007, but in 2014 that figure jumped to over $2.1 million, its highest point yet.

Of course, tax preparation companies aren’t the only group opposed to letting the government handle tax filing for citizens. For anyone with a fundamental distrust of government in general, the proposal that tax filing be handled by the same entity that is collecting the funds doesn’t sit well.

Under a system where the government would calculate the taxes you owe or the refund that you are due, a feedback and dispute system would obviously need to be a priority, though the fear seems to be whether or not the act of disputing the government’s figure would be a red flag for a deeper investigation. If so, you’d probably just wish you had the ability to file your return yourself and save yourself the headache of an audit.

In a case like this, is there a lesser of two evils?