Maybe everyone just stop being jerks to everyone else. That would be nice.

For as long as there has been democracy, there have been allegations of incivility levied by one side of the political divide against the other.

A survey of 1,017 Americans over the age of 18 set out to quantify that rancor for the 2016 election cycle, and the results cast some doubt on a long-standing narrative of the Democratic presidential primary: That the supporters of Vermont Sen. Bernie Sanders have been significantly nastier online then the supporters of former Secretary of State Hillary Clinton.

The survey, which was conducted online in early March and has a margin of error of 3.07 percent, asked people to rate how aggressive they saw the online supporters of each presidential candidate. 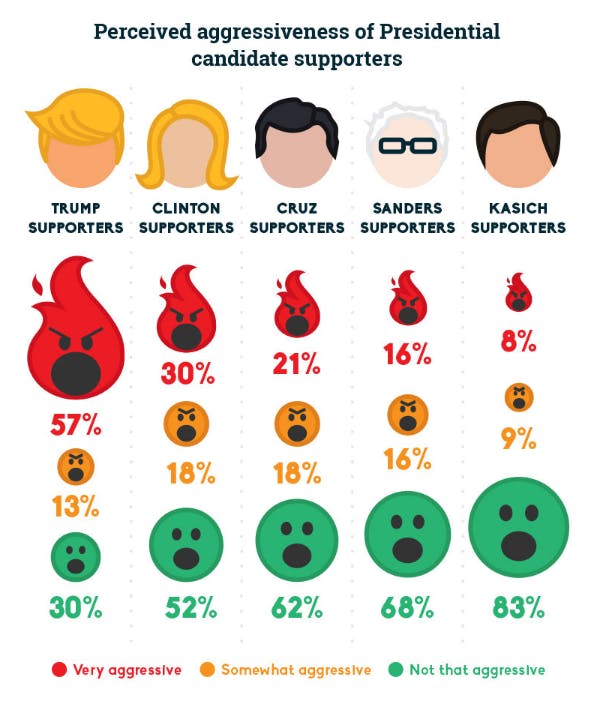 In some ways, the results of the survey—conducted by the pollsters Lincoln Park Strategies on behalf of the consulting firm Rad Campaign and craigconnects, the philanthropic arm of the empire of Craigslist founder Craig Newmark—are not surprising.

Following the lead of Trump—whose constant stream of Twitter insults are directed at everyone and everything from Jeb Bush and the Republican National Committee to former MMA champion Ronda Rousey and a podium in the Oval Office have been exhaustively cataloged by the New York Times—supporters of the real estate heir turned reality TV star are viewed as the most aggressive by a wide margin.

The online harassment campaigns waged against people who get put in the cross-hairs of Trump’s online horde are well-documented. After Huffington Post reporter Julia Craven tweeted her own anti-Trump sentiment following the candidate’s victory in the Nevada caucus, she became the target of a slew of nasty, racist, and sexist tweets, many of which contained threats of violence.

@CurlyCrayy When you're deported to Africa you'll learn what living in a country without white people in power is like. You won't like it.

It’s likely not a coincidence that much of the harassment Craven received targeted her race. Nearly three-quarters of African-Americans rated Trump supporters as very aggressive online. That number was significantly lower for whites—53 percent.

Even 35 percent of Trump supporters themselves viewed the actions and rhetoric of Trump fans online as very aggressive or threatening.

“It seems like this cycle there’s a lot more discussion happening in social media and discussion I’d classify as not the most polite. People are taking very strong views. As we saw in the data, some of the candidates’ supporters are viewed as being much more aggressive,” said Lincoln Park Strategies President Stefan Hankin.

What’s more surprising is the perception on the Democratic side—nearly twice as many respondents viewed Clinton’s supporters as very aggressive (30 percent) as said the same for Sanders supporters (16 percent). While women were more likely than men to see Trump supporters as aggressive, the opposite was true for both Clinton and Sanders. 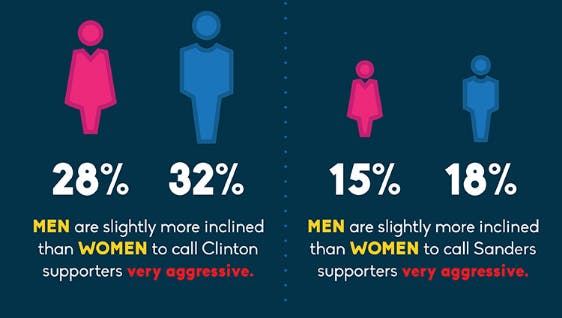 Among respondents who point to Clinton as their first choice, 22 percent labeled Clinton supporters’ online behavior as very aggressive. Within the Sanders camp, 14 percent of his supporters leveled the self-proclaimed democratic socialist’s fan club as especially aggressive.

These results run contrary to the popular narrative of the so-called “Bernie bro,” passionate (typically male) Sanders supporters whose forceful push-back against anyone (typically female) saying nice things about Clinton was often viewed as harassment. The relative merits of the Bernie bro phenomenon were debated endlessly, but qualifying it has largely remained elusive.

“We didn’t do a lot of follow up specifically about Bernie bros or anything like that, but the numbers certainly point to the fact that there’s probably a little bit more attention going to the Bernie supporters who are taking a very hard stance compared to what seems to be happening out there,” Hankin explained. “I think there’s a lot of discussion out there, but that discussion may be proportionally out of whack—at least according to the survey results that we see.”

To be fair, many Clinton supporters have felt like they’re consistently and repeatedly harassed into not speaking out about their backing of Clinton online. In a series of interviews with the Daily Dot earlier this year, a number of Clinton supporters reported regularly feeling intimidated when talking politics online with friends, family members, and acquaintances who vocally and repeatedly backed Sanders.

It became enough of an issue that Sanders himself addressed it in a speech. “We don’t want that crap,” Sanders said during an interview with CNN in February. “Look, anybody who is supporting me doing sexist things, we don’t want them. I don’t want them. That is not what this campaign is about.”

That Clinton felt little recourse to do the same, even if this week’s survey indicates a larger percentage of the population views her support base as being aggressive online, likely provides some insight into how political narratives are shaped.

Respondents in the survey were split almost evenly down the middle about whether they’ve expressed an opinion about a political candidate online.

However, as it turns out, those expressions have consequences when it comes to online friendships. Fifteen percent of respondents said they have unfriended someone on a social network based on an opinion that person expressed about the 2016 election—that number jumped for people who were deeply engaged politically (20 percent), Hispanics/Latinos (23 percent), or under the age of 35 (25 percent).

Regardless of who has the most obnoxious online troll army, the survey showed that most people think the candidates have a role to play in encouraging civility online. Fifty-four percent of Americans—broken down as 63 percent of Democrats and exactly 50 percent of Republicans—believe that the presidential campaigns themselves should take a more active role in standing up to the bad online behavior of their supporters.

“I’m not surprised to see… the majority of Americans say that presidential campaigns should take a more aggressive stand against this type of behavior,” said Allyson Kapin of Rad Campaign. “I think people are fed up with the hostility and harassment that is happening online and offline around the presidential elections.

“The hostility, the racism, the sexism, this is not part of our democracy,” she continued. “This is also getting into voter intimidation, which is anti-democratic. It’s a big problem for Americans, I think that the polls show that they’re clearly frustrated and they want their candidate to take a more aggressive stand. We’ve seen [that] happen in the election from time to time, but I don’t think they’re taking a strong enough stand.”