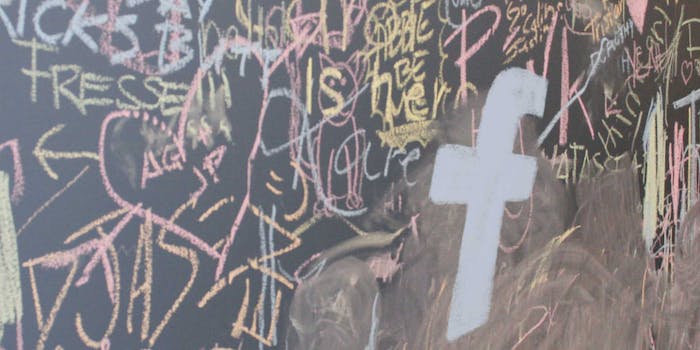 You can't escape these feelings.

We knew Facebook was a nostalgia machine long before the company acknowledged it. Before Timehop, before Facebook’s On This Day copycat service, way back when the Wall still existed, we were using Facebook for deeply nostalgic purposes.

We’d click through Wall-to-Wall messages and scan through our tagged photos, reliving memories from weeks, months, and years past. Remember that party? Remember this road trip?

Reliving your past through the Internet has the precarious potential to either warm your heart or break it into a million pieces—or both. While a smell or an old postcard can trigger a memory, the realism of seeing it, reading it, and reliving what everyone was talking about at the time brings a stark clarity to the nostalgia. When reading something on Facebook as opposed to dredging it up from one’s own memory, there are fewer fuzzy parts for one’s brain to fill in with potentially kinder, less accurate details.

Despite the risk, I’ve kept the notifications on since On This Day launched. And after a week, I’ve noticed that four major feelings keep hitting me like a ton of pixelated bricks.

The first On This Day notification I received didn’t make me sad or happy. It made me embarrassed. Reading the third-person updates I’d found so clever in college, all I could think was, “I used to be really, really stupid.” It made me want to yank the laptop away from my 20-year-old self and beat her with it.

The way Facebook transitioned us from the Wall to the Timeline was messy, to say the least. One result of the confusion is that nothing you wrote makes sense when you look back far enough. But Facebook’s On This Day algorithm doesn’t care—it’s throwing caution to the wind! 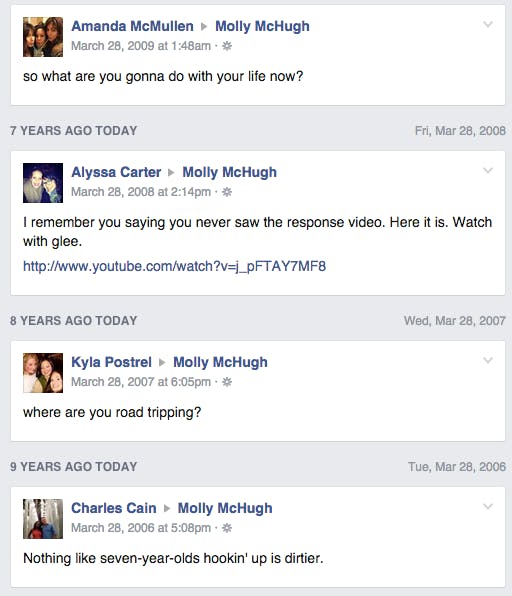 I don’t understand any of this.

I assume these messages meant something at the time, but now they just make me wonder: Where was I?

It becomes very apparent when Facebook thinks a day is important. When you and your friends do something and tag each other in order to mark the occasion, you get multiple On This Day notifications about it. The event could be as mundane as a dinner out. Facebook does not care. You will get multiple reminders that it happened. 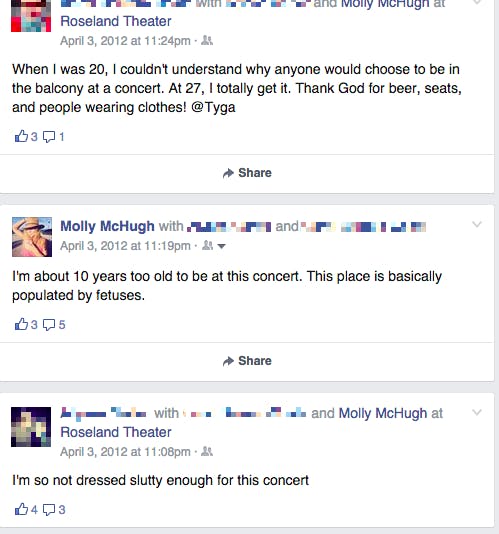 No matter how hard Facebook tries to shield us from painful memories, it simply cannot. I’ve been greeted by the memory of a road trip with my ex, as well as the day I became Facebook friends with the brother of another ex. Both of these things pull at a part of me that I can’t identify. I feel sad, because these used to be important people. Now they’re just notifications that Facebook summons next to a cutesy cartoon of a cat photo.

Sadness and nostalgia go hand in hand; one cannot be escaped when indulging in the other.

Photo by Leah Gregg/Flickr (CC by 2.0) |  Remix by Max Fleishman