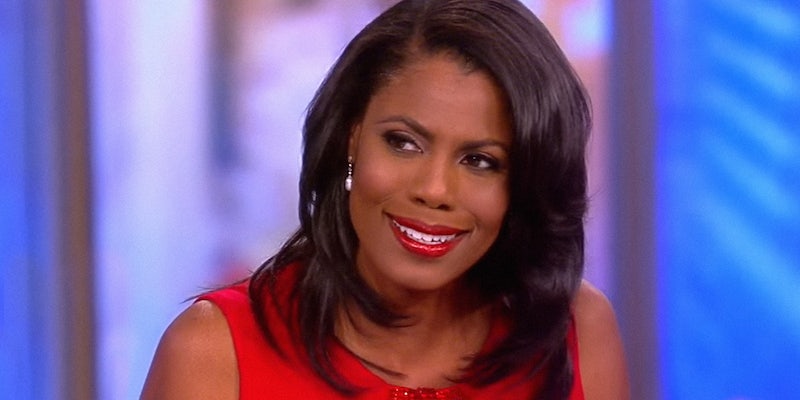 Omarosa's new book will either be a bust or a disaster.

Omarosa Manigault-Newman, the former reality show star who turned an appearance on The Apprentice into a position in President Donald Trump‘s administration, is promoting her book chronicling her time in the White House and promises to have recorded conversations of the president.

Dubbed the “Omarosa Tapes,” the Daily Beast reports at least one person has heard these secret records off Manigault-Newman’s phone. The recordings do include the voice of Trump. Multiple sources called the recorded conversations “anodyne, everyday chatter.”

The book also levels accusations of racism at the president.

The Guardian obtained an advanced copy of Manigault-Newman’s book, “Unhinged.” In it, the former director of communications for the White House Office of Public Liaison claims she heard the president use a racist slur toward George Conway, husband of Kellyanne Conway.

She also claims that she personally witnessed Trump use racial epithets about the White House counselor Kellyanne Conway’s husband George Conway, who is half Filipino. “Would you look at this George Conway article?” she quotes the president as saying. “F**ing FLIP! Disloyal! Fucking Goo-goo.

Conway, who has broken with the president on several occasions and even defended the Mueller investigation, claims that report isn’t credible.

The allegation is not credible, and indeed is ridiculous, particularly in light of the timing of her departure from the White House—December 12, 2017. It’s absurd all around.

The book also alludes to the long-standing rumor that Trump used the N-word while filming The Apprentice. Manigault-Newman doesn’t says if she personally never heard Trump use the “N-word,” but says the long speculated tapes of Trump using the slur exist.

“It had finally sunk in that the person I’d thought I’d known so well for so long was actually a racist. Using the N-word was not just the way he talks but, more disturbing, it was how he thought of me and African Americans as a whole.”

There are the Cohen Tapes, the other Apprentice tapes involving former contestant Summer Zervos, the Access Hollywood tape, the fake claim of recordings involving former FBI head James Comey, and the audio of former White House communications director Anthony Scaramucci that would make even your drunk uncle blush.

The current president gets caught in a fantastic number of audio conversations, especially for a man who goes out of his way to not be recorded.

“Unhinged: An Insider’s Account of the Trump White House” will be released on Aug 14. Simon & Schuster, the publisher of Manigault-Newman’s book, would not confirm or deny the existence of the recordings.