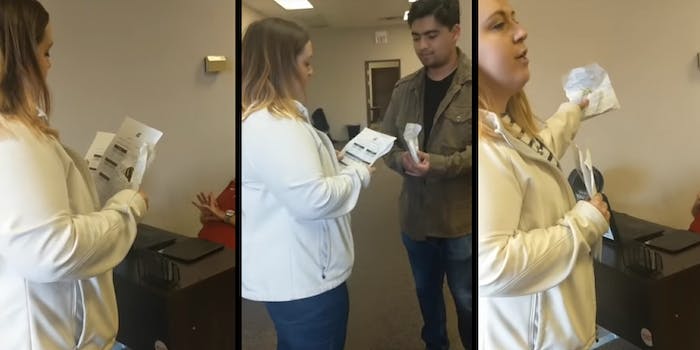 The two men were trying to dupe Rep. Tom O'Halleran's campaign, it appears.

Two Republicans apparently tried to use fake names to donate to Democrats while posing as communists before they were caught, according to reports.

Two men using the names Jose Rosales and Ahmahd Sadia tried to donate $39.68 to Rep. Tom O’Halleran’s (D-Ariz.) campaign from the Northern Arizona University (NAU) Communist Party, the Guardian reports. But the campaign felt something was off when they insisted on getting a receipt for the donation.

Lindsey Coleman, the finance director for the campaign, then drove to a local Republican field office to return the money—and spotted the person who claimed to be Jose Rosales in an office.

The encounter was captured on video and posted on YouTube.

“Are there two young Republicans named Ahmahd or Jose?” she asks.

When someone at the front desk says there are no people by that name, the man claiming to be Jose—whose real name is apparently Oscar—walks out of an office.

When Coleman returns the cash, she makes it clear:

“Here you go Oscar, us returning the funds you just made … to our campaign under the name of Jose Rosales claiming to be with NAU Young Communists when in fact you are with the NAU Young Republicans and your name is Oscar,” she says in the video. “I don’t know if you heard me, it is illegal to falsify donation information to the FEC. So thank you for support, but we cannot accept your funds.”

Coleman told the Guardian the second man, who went by Ahmahd Sadia, was a field organizer for the Arizona Republican party.

O’Halleran is running against Republican Wendy Rogers in this November’s midterm election.

You can read all of the Guardian‘s report here.