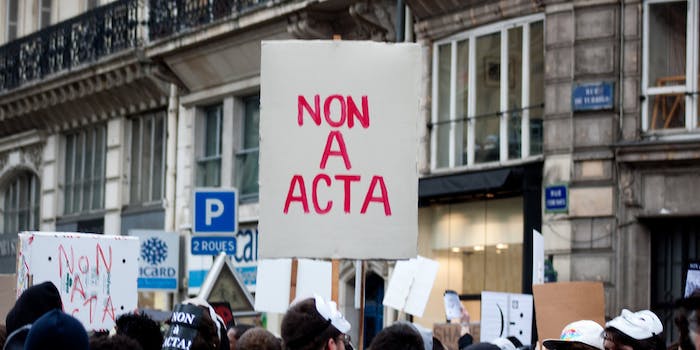 Yet another European Union advisory committee, the Committee on Development, decided Monday that the Anti-Counterfeiting Trade Agreement is a bad idea. That makes the fourth in five days to recommend against ACTA.

Now there’s just one more vote before the big one.

ACTA, which critics fear would allow participating governments invasive abilities to spy on citizens’ Internet activity, was quietly signed by a number of countries in late 2011, including the U.S., Canada, and Japan.

But Internet defenders across Europe have been extremely vocal about stopping the agreement. A number of countries have officially expressed grave reservations about it, especially the Netherlands, whose House of Representatives passed a resolution to never sign ACTA or anything like it.

To that end, activists in at least 13 countries are planning to hold simultaneous gatherings against ACTA on June 9.

That will be 11 days before the last vote by the most influential committee, International Trade (INTA) on June 20. Fortunately for activists, David Martin, a member of the INTA and its official advisor on ACTA, officially condemned the bill in April.

After the INTA vote, there’s only one left: the Europe-wide E.U. parliamentary vote in July.

Rick Falkvinge, founder of the Pirate Party, whose members have played crucial roles in influencing these committee decisions, urged caution.

“The lobbyists are not to be underestimated,” he tweeted. “I’m keeping the champagne chilled, but not more yet.”