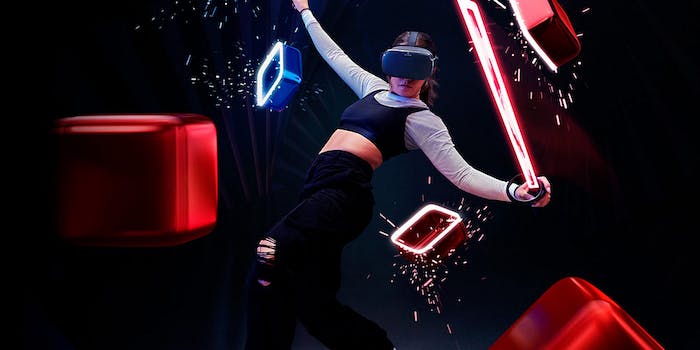 What is the Oculus Quest? Your guide to Facebook’s VR headset

It may just be virtual reality's future.

In May 2019, the Oculus Quest virtual reality gaming headset launched to consumers. In less than a year, the Quest became one of the most influential VR devices on the market. Facebook revealed that the Quest was largely responsible for Q4 2018’s $346 million revenue in miscellaneous, non-advertising sources. Mark Zuckerberg even declared the Quest’s sales “stronger than we expected.” It’s a sign that Oculus is not just here to stay, but that the Quest is only going to get more popular in the near future.

What is the Oculus Quest?

The Oculus Quest is a standalone virtual reality headset created by Oculus, Facebook’s VR arm. The Quest is the most popular dedicated VR headset available and is capable of handling flagship VR games like Superhot VR and Beat Saber with ease.

The Quest runs off a modified Android OS with a Qualcomm Snapdragon 835 CPU and a 1440 x 1600 pixel resolution display per eye. The device also comes out of the box with Oculus Touch controllers. This means the Quest has both a high-end visual display and supports advanced movement across physical space.

While the Quest is primarily a gaming headset, it doubles as a standalone VR multimedia hub. Users can watch Netflix in virtual reality, view WebVR material via the Oculus Browser, download 3D VR videos (that is, videos that output a separate image per lens), and use VR apps like VRChat and Virtual Desktop. Oculus is increasingly adding experimental features, too, such as hand-tracking support.

The Quest is a fantastic, user-friendly introduction to VR—but it’s also pricey. The entry-level bundle offers 64GBs of storage for $399, and its heftier equivalent features 128GBs for $499. This doesn’t include an optional Oculus Link cable for connecting the Quest to PC for PC VR games or any purchases from the Oculus Store. Additionally, due to the Oculus Quest’s popularity, the VR headset is more often than not back-ordered on Oculus’ website.

What games can you play on the Quest?

The Quest hosts a mixture of popular PC VR ports and original titles. Many of these games include cross-buy options, letting players enjoy their purchases on both the Quest and via their PC. Some of the most popular Oculus Quest games include:

Quest users can access their PC VR library either with a dedicated USB-C cable connected to their Quest via Oculus Link or by streaming their PC to their headset with Virtual Desktop. This more or less turns the Quest into a dedicated Oculus Rift headset, provided your PC has the proper specs for playing VR games.