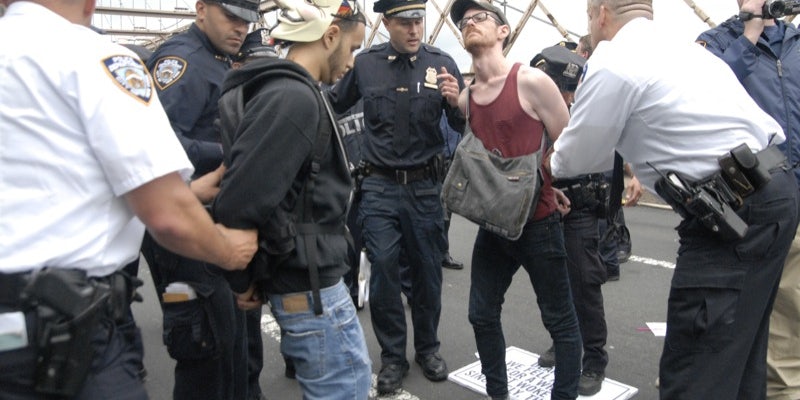 New York police made more than 700 arrests this weekend under hotly contested circumstances. Ever since protesters have been reviewing the tapes, saying they support their side of what happened.

More than 700 Occupy Wall Street protesters, encamped in lower Manhattan to protest big banks’ role in the ongoing economic crisis, were arrested during a march on the Brooklyn Bridge Saturday. And thousands have been reviewing the videos and photos of those protests and arrests ever since.

Many said the footage footage shot over the weekend (like footage of last weekend’s Occupy Wall Street) showed discrepancies between the official police version of the arrests and those of the protesters.

Protesters have said that the New York Police Department misled them and corralled them onto the bridge, where they were essentially trapped, and then arrested them.

Police said the protesters were arrested for blocking the road.

The Business Insider, an online financial publication, featured two videos of cops leading the protesters onto the bridge, with the headline “Will These Two Videos Absolve The Arrested Brooklyn Bridge Protesters?”

A New York Times blog post about the mass arrest stated the protesters “believed the police had tricked them, allowing them onto the bridge, and even escorting them partway across, only to trap them in orange netting after hundreds had entered.”

But protesters took to the Internet to tell their side of the story.

One man identified only as Chris, said in an interview with another sympathetic protester that police led the protesters up the Brooklyn bridge only to trap them.

“There is footage that shows a barricade of police officers making way for the march onto the bridge.. literally leading us in. Once they knew the trap was set… they let people in.”

His interview has drawn more than 10,000 views on YouTube.

Six of the Occupy Wall Street protest videos made it onto YouTube’s top-twenty News and Politics section throughout the weekend and held their positions Monday.

Most YouTube comments on the recent protest footage echoed the protesters statements about being misled. “Come into my parlor, said the spider to the fly,” wrote oldlefty66, the top comment on a 16-second video of police leading the way up the bridge.

“Seems like the NYPD are working for the 1%,” wrote conchf, in a reference to the nation’s wealthiest. “JPMorgan Chase donated $4.6 million to the NYPD. The Police State that is occurring in this country is another step towards fascism. I don’t recognize my country anymore.”

Stephanie Keith, 40, a freelance photographer arrested on Saturday, backed up claims by those online, saying she also was confused by the police tactics. Keith told the Daily Dot in a phone interview that she was in the front of the crowd, and was among the first to be arrested.

At the beginning of the confrontation, police read from a prepared statement, telling protesters they would be arrested if they blocked the road. But she said, “no one except the few people in the front heard the police, because the chanting was so loud,” Keith said. “The people in the back had no idea the police had said anything.”

After a brief stand-off, the “police turned around and started walking up the ramp up to the roadway, and the protesters followed.”

“It seemed to me at the time that the police had ceded that space, and were allowing protesters on bridge,” Keith said. “I was confused why they would do that, why they turned their backs and walked on bridge. The police didn’t say anything else. They were completely silent, walking with protesters up the bridge.”

Keith said police then started arresting people once the protesters were a third of the way onto the bridge.

“I got the sense that they wanted to send a really strong message to the protesters. They arrested everyone they could get their hands on,” said Keith.

She got swept up in the arrests, along with protesters because she didn’t have an updated NYC press pass.

Incidentally, Keith sold 11 of her protest photographs to the Associated Press.