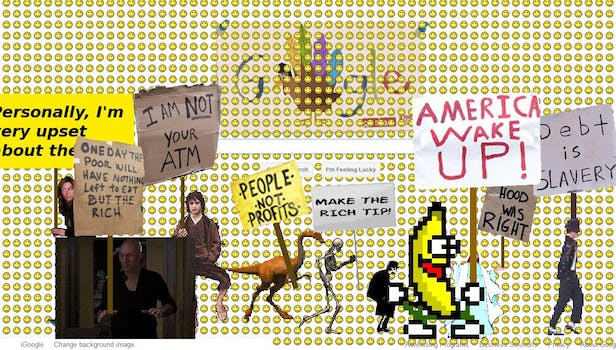 The Internet proves a warmer, safer environment for the Occupy movement to defend the 99%.

First they occupied Wall Street. Then they occupied the world. Now they’re occupying the Internet—just like the Daily Dot suggested.

The creative minds over at the Free Art and Technology Lab are asking Web administrators to splash GIFs of protesters across their Web pages. The images are of characters like Super Mario, Frodo Baggins, and a unicorn holding signs supporting the 99%—the Occupy movement’s label for Americans whom protesters say have been ill-treated by our financial and political systems.

Or, if those GIFs are too distracting, you can chose to have an army of yellow smiley faces rest on the bottom of your page.

So far, more than 140 webmasters have uploaded the GIF protesters into their sites while hundreds more have “force-occupied” sites like GoldmanSachs.com using a clever masking tool. But for those of you with a burning passion to occupy the net, new Web browser plugins also allow you to “live-protest” any site you visit and see how many people are doing the same. For example, Facebook has more than 124,000 people protesting it right now.

The GIF protesters are certainly a clever way to show your support for the 99%, but will it capture the attention of the mainstream media? Chances are, it won’t. But if someone were to upload these GIF images to a big banking website, you can bet it will get some attention.

Indeed, the protest may be too popular for its own good, as the Free Art website appeared to be offline at publication time—possibly because it’s been overwhelmed by interest. The Daily Dot has reached out to the folks at the Free Art and Technology Lab for a comment and is waiting to hear back.