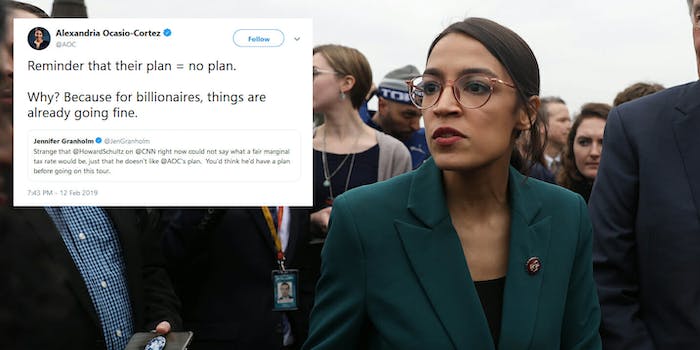 Schultz called the idea 'punitive' during a CNN town hall on Tuesday.

During the discussion, Schultz, a billionaire, said that he believed he should be paying more taxes, but called the plan floated by Ocasio-Cortez “punitive.”

“I don’t know what the number is, I think what I’m saying is we need comprehensive tax reform,” he responded.

When pressed by Harlow, Schultz continued:

“I think what is being proposed at 70 percent is a punitive number and I think there are better ways to do this,” Schultz said, later adding: “I don’t know what the number is, but what I’m suggesting is I should be paying higher taxes.”

In response, Ocasio-Cortez suggested that Schultz didn’t have a tax plan of his own because “things are already going fine” for billionaires.

“Reminder that their plan = no plan. Why? Because for billionaires, things are already going fine,” she wrote on Twitter, quote tweeting someone criticizing Schultz’s remarks.

Reminder that their plan = no plan.

Why? Because for billionaires, things are already going fine. https://t.co/YrZlU5zvdh

Schultz has been criticized by left-leaning people ever since his announcement last month that he was considering running in 2020 as a “centrist independent.”