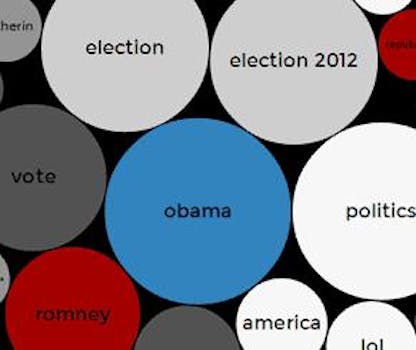 The Democratic incumbent held onto the presidency while winning hearts on Tumblr.

According to a real-time Union Metrics visualization tool, Tumblr collected upward of 170 posts per second on election day, with Obama and other Democrat related terms getting mentioned at a much higher rate than Republican ones.

The top “election2012” post made in the last month was of a seven GIF photoset featuring an elderly woman talking into the camera about her anger over reports of Republican voter suppression this election season, living through WWI, and voting for Franklin D. Roosevelt. The GIFset was posted on Nov. 2 and has collected more than 162,000 notes.

The following is a Tumblr topic summary for Obama. Click to enlarge: