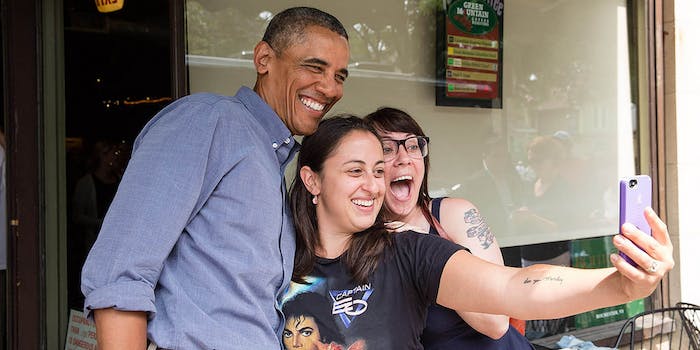 The presidential selfie may now be a thing of the past, and you can blame Samsung for killing it.

During a White House visit with teammates last Tuesday, Red Sox slugger David Ortiz snapped a selfie with President Obama, posted it to Twitter, and raked in some 42,000 retweets. Problem is, the photo turned out to be a premeditated viral marketing stunt for the Samsung Galaxy Note 3 smartphone—a ploy that, according to White House Senior Adviser Dan Pfeiffer, prompted Obama administration lawyers to have “conversations” with the South Korean gadget maker, which eagerly retweeted the photo to its 5.2 million followers.

“In general, whenever someone tries to use the president’s likeness to promote a product, that’s a problem,” Pfeiffer said of the selfie on Sunday’s episode of Face the Nation. “We’ve had conversations with Samsung about this and have expressed our concerns.”

“Maybe this will be the end of all selfies,” Pfeiffer added (half joking). “[Obama] obviously didn’t know anything about Samsung’s connection to this.”

What an honor! Thanks for the #selfie, @BarackObama pic.twitter.com/y5Ww74sEID

Big Papi, Big Selfie. RT @DavidOrtiz What an honor! Thanks for the #selfie, @BarackObama pic.twitter.com/3I7ckLjquf

Samsung confirmed to the Boston Globe Wednesday that it had its mitts all over the Ortiz-Obama selfie.

“When we heard about the visit to the White House, we worked with David and the team on how to share images with fans,” the company said in a statement. “We didn’t know if or what he would be able to capture using his Note 3 device.”

White House press secretary Jay Carney quickly denounced the commercialization of the presidency, telling reporters Thursday, “I can say that as a rule, the White House objects to attempts to use the president’s likeness for commercial purposes. And we certainly object in this case.”

Samsung, you may remember, was also behind Ellen DeGeneres’ Oscars selfie, which rocketed across the social network to become the most popular tweet of all time.

As for Obama, selfies may be more trouble than they’re worth. The president caught heat in December after he agreed to snap a selfie with British Prime Minister David Cameron and Danish Prime Minister Helle Thorning-Schmidt during Nelson Mandela’s funeral.

So, is the presidential selfie really dead? Who knows—but it probably should be.

Update: Good news, selfie fans: White House press secretary Jay Carney says there was “no discussion of a ban” at the White House, The Hill reports. He added that Dan Pfeiffer’s comments on Face the Nation were said “humorously,” and not intended to apply specifically to President Obama.