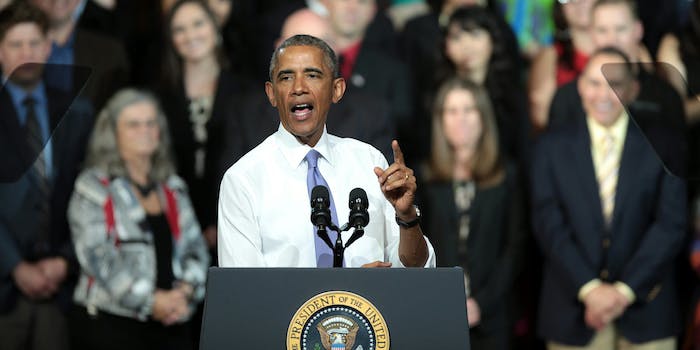 Obama returns to politics ahead of 2018 election

Obama is getting back on the stump for Democrats.

After months of staying (mostly) out of the political fray, former President Barack Obama is returning to the political spotlight to campaign for gubernatorial candidates in New Jersey and Virginia.

Obama has only spoken out against President Donald Trump’s administration and policies on a select few issues since he left office in January. The decision to stump for gubernatorial candidates will be the first of several appearances the former president will make leading up to the 2018 midterms, according to the Associated Press.

“Obama seems to be determined to be an engaged and active former president who’s playing a role in different issues and is involved in politics,” Rutgers University professor David Greenberg told AP.

Obama will campaign for Phil Murphy, New Jersey’s Democratic gubernatorial candidate and former ambassador to Germany for the Obama administration, and then do the same for Ralph Norman, who is running to become governor of Virginia.

The former president’s popularity could be seen as a boon for the candidates, as Democrats look to see how they perform with voters as they look ahead to the 2018 midterms. On Obama’s last day in office, he had a 59 percent approval rating, his highest since December 2012 and his inauguration, according to Gallup.

Democrats should not, however, expect Obama to go on a warpath against Trump: An advisor to the former president tells ABC News that his speech in Richmond, Virginia, will likely not focus on Trump or any “backward-looking” issues.

While Obama may avoid Trump on the stump, he has commented on several of Trump’s decisions and policies since leaving office.

In June, Obama criticized Republican efforts to repeal and replace the Affordable Care Act, his signature domestic policy. Similarly, Obama criticized the Trump administration’s dismantling of the Deferred Action for Childhood Arrivals program, known as DACA, in September. The program temporarily shields undocumented immigrants who arrive in the United States as children from deportation.