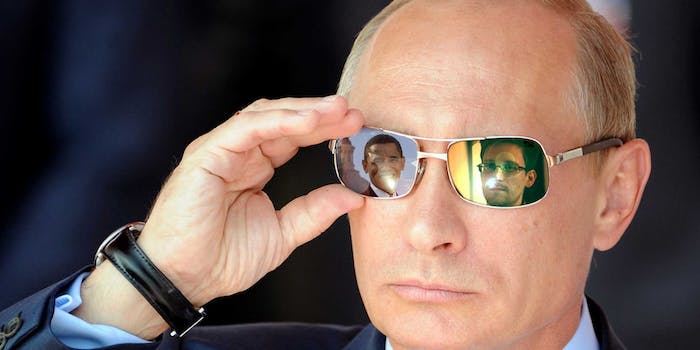 Obama cancels his planned meeting with Vladimir Putin after Russia in part because of the asylum granted to NSA whistleblower Edward Snowden.

After Snowden disclosed the NSA’s massive domestic and international surveillance operations in June, he fled to Hong Kong and then Russia, where he was allowed to live for a month in Moscow’s airport. On August 1, Russia granted him temporary asylum.

The White House has repeatedly stated it was “disappointed” with Russia’s willingness to accommodate Snowden.

Obama had planned to meet up with Putin during his visit to a G20 summit in Russia. This morning, White House press secretary Jay Carney announced that the Obama administration had canceled the one-on-one session with Putin.

Carney said there was “not enough recent progress in our bilateral agenda with Russia” to said, citing a lack of progress on missile defense, arms control, and trade issues as impetus for canceling the discussion.

“Russia’s disappointing decision to grant Edward Snowden temporary asylum was also a factor that we considered in assessing the current state of our bilateral relationship,” Carney said.

During an interview with Jay Leno last night, Obama expressed similar sentiments. “I was disappointed,” he said. “In some ways its reflective of some underlying challenges we’ve had with Russia lately.”

“There have been times when they slip back into Cold War thinking,” he added. “That’s the past.”