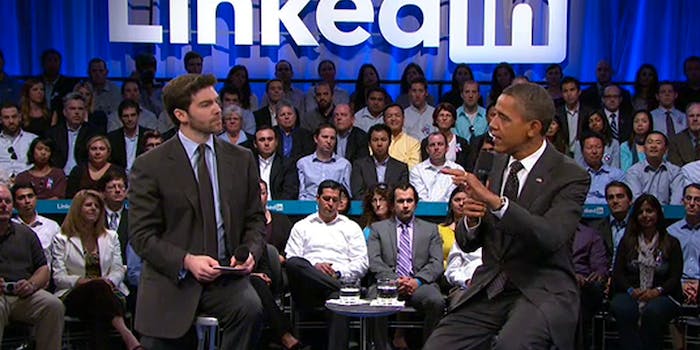 Questioners seem friendly to Obama during his LinkedIn town hall.

The town hall, which sounded like a pitch for Obama’s American Jobs Act, was moderated by LinkedIn’s CEO Jeff Weiner at the Computer History Museum in Mountain View, California, the heart of Silicon Valley. The questions came from LinkedIn members in the audience.

The partnership between LinkedIn and Obama’s job talk was an easy fit. LinkedIn, a social network that connects people professionally and focuses on helping people find jobs and employees, has logged more than 7.5 million job changes on its site according to an infographic released by the site.

Weiner noted in his introduction that the unemployment rate is over nine percent but there are more than three million available jobs.

“The most important thing we can do right now to jump start the economy, which has stalled…is to pass this jobs bill,” Obama answered a businessman who who asked what everyone can do to reboot the economy.

Obama once again defended the American Jobs Act, saying it is paid for, and would therefore not increase the debt. The bill’s aim, he said, is to decrease the unemployment rate.

Questions ranged those asking about how the government can help veterans secure jobs to one from a person asking how the government will help students pay off their college loans. Most of the pre-screened questions were Obama-friendly.

A spontaneous moment came when a businessman asked Obama to raise his taxes. “I am unemployed by choice,” said ex-Googler Doug Edwards. “I want others to have the same benefits I did.” If the bill is passed, there are tax increases on the wealthy, Obama said.

“We are going through a tough time but we’ve gone through tough times before,” Obama said at the end of it. “I want your voices to be heard in Congress and say to the folks you’ve elected, we expect you to act responsibly.”

Of course, it wouldn’t be an event if it wasn’t for some snarky reactions from Twitter. Kyle Van Essen tweeted “RUMOR: Obama goes to LinkedIn just to personally unsubscribe from their emails,” while Ben Dooley tweeted “President Obama’s #LinkedIn town hall just started. Expect it to be followed by an AOL Usenet town hall sometime next month.”