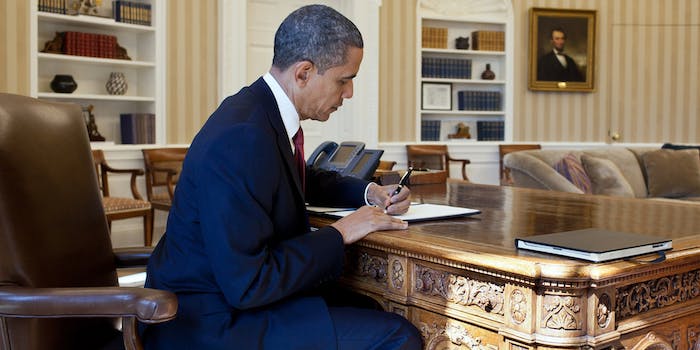 The order doesn't affect all private businesses, but it's a step toward the president's broader goals.

President Barack Obama will sign an executive order Monday requiring all federal contractors to give their employees paid sick leave.

The order will grant employees working on federal contracts the right to receive a minimum of one hour of paid leave for every 30 hours they work, the White House said in a statement. Those employees will also be able to take time off from work to care for sick relatives. The plan will affect as many as 300,000 employees who currently receive no paid sick leave while working on government contracts.

The president announced the executive order during a Labor Day speech celebrating the accomplishments of America’s workers. It will direct contractors to implement the policy changes beginning in 2017, around the time Obama leaves office.

The president also plans to ask Congress to pass legislation requiring every business with at least 15 employees to offer them up to seven days of paid sick leave per year. He first proposed the idea in January during his State of the Union address.

“Today, we are the only advanced country on Earth that doesn’t guarantee paid sick leave or paid maternity leave to our workers,” Obama said during that speech. “Forty-three million workers have no paid sick leave—43 million. Think about that.”

Most of the Republicans in the House chamber didn’t applaud when the president asked them to send him a bill authorizing paid sick leave for federal employees. Conservatives argue that mandated time off will hurt small businesses that are ill-equipped to cover the costs.

“There are certain Republicans that said we can’t afford to do this,” Labor Secretary Tom Perez told reporters on Sunday. But, he said, the nation’s current paid-leave policy is “stuck in the Leave it to Beaver era.”