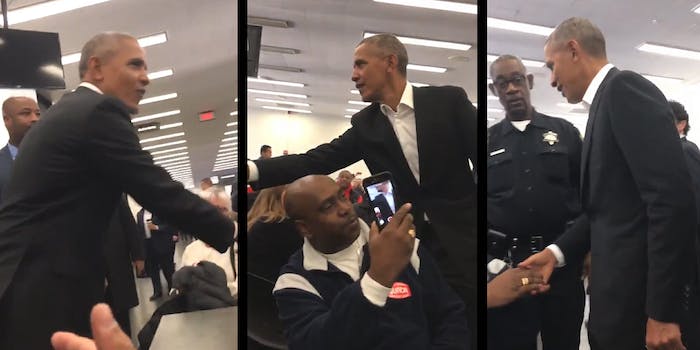 He did have to watch a requisite 20-minute video, though.

Turns out being a former president doesn’t get you out of being summoned for jury duty—but it does help get you dismissed from serving.

President Barack Obama reported to jury duty in Cook County, Illinois, on Wednesday and was dismissed a short time later, according to the Chicago Tribune.

“The public allowed him to come in and to do his duty,” Cook County Judge Timothy Evans said, according to CNN. “I thought, for example, he would be reticent about greeting them. He came in and greeted the prospective jurors on both side[s] of the panels. We had about 220 people here.”

Obama’s motorcade was parked in a secure garage under the justice center, and he used a private elevator reserved for judges before entering the jury assembly room where he was met with reporters, court staff, and attorneys.

A video taken by a fellow jury member shows Obama walking in and greeting people in the jury assembly room, flanked by an entourage.

While Obama wasn’t ultimately picked to serve on a jury, he did have to watch the requisite 20-minute video on jurors’ responsibilities, CNN reported—so it wasn’t a total cakewalk for the former president.