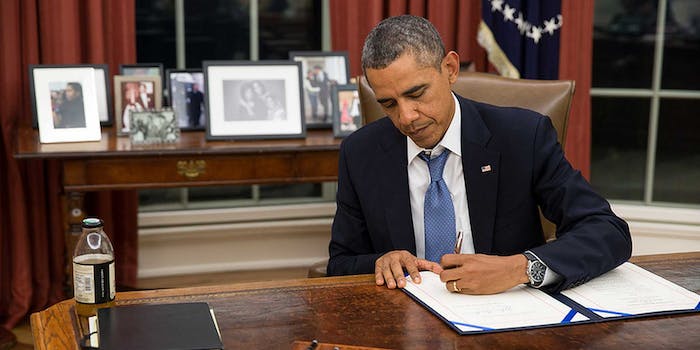 Obama so confident in new Healthcare.gov he’s going to use it himself

It's an entirely symbolic act, considering the first family's medical care is covered with taxpayer money.

The improved Healthcare.gov is now capable of handling up to 50,000 users at a time. And the commander-in-chief himself may be one of them.

On Monday, White House Press Secretary Jay Carney confirmed that President Barack Obama will sign up for health insurance through one of the exchanges created by the Affordable Care Act (ACA).

“I know that he will and has said he will,” Carney told reporters.

It’s the first recent confirmation that the president still plans to acquire coverage through the exchanges at the heart of his signature legislation. Politico reports the president first announced he would sign up for insurance through an exchange shortly after the ACA was passed into law in 2010. Since then, there have been few updates about the president’s personal plans.

The move would be a symbolic one, as the first family’s medical care is provided by White House doctors paid for with federal tax dollars. The president still has the option, however, of signing up for insurance either through the District of Columbia’s own exchange or through his home state of Illinois, which uses the federal exchange website.

If Obama does sign up through Healthcare.gov, it could help boost public perception of the poorly launched site—assuming he can do so without running into problems.

Almost immediately after Healthcare.gov’s Oct. 1 debut, users reported bugs, glitches, and server downtime when trying to access the site. It was later revealed that only 50,000 people managed to sign up during the first month—well below administration goals. And Congressional hearings later uncovered sloppy and last-minute planning  behind the site, capping off a fairly embarrassing couple of months for Obama.

But earlier this week, the administration announced major improvements to the exchange. The White House says more than 400 technical issues have been fixed, allowing the site to work 90 percent of the time and enabling up to 50,000 users at a time to access the site.

Photo by The White House/Flickr