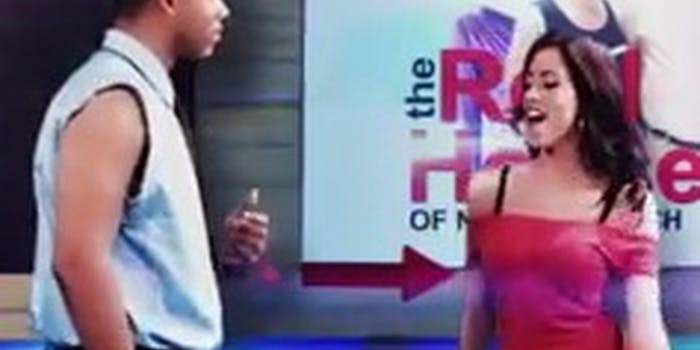 Pres. Obama's not-so-secret admirer appears to be having doubts about the 2012 presidential election.

Obama Girl, the YouTube and media sensation of the last presidental election, is back. Will she able to rally the young voters to vote for her man or will the GOP win this time around? Obama Girl herself doesn’t seem too hopeful this political season.

In 2007, Obama Girl became a viral hit with “I Got a Crush…on Obama,” which to date has been viewed more than 24 million times. In the video, the attractive young voter expresses her admiration for the candidate and gushes about certain reforms like health care. (The sexual tone of the video actually upset Obama’s own daughters.) Her “Super Obama Girl” video was even more popular, with current views at 39 million.

Obama Girl’s newest video has a slightly different tune. “Glease,” a parody of the closing number in Grease, is still sexual but not as supportive of the candidate.

“You better step up, cause I need that man, if my old crush on you was true,” she sings at one point, adding later  “You better bone up, if you ain’t gonna lose, don’t act a fool.”

Barack Obama impersonator Iman Crosson sings John Travolta’s/Obama’s part and wonders, “I thought you all were on my side.”

“Glease” also features fellow YouTubers, including Will Hyde, who covers YouTube community news on his The Will of DC channel.

Surprisingly many YouTubers, who weren’t commenting on Obama Girl’s looks or trying to get people to vote for Ron Paul, repeatedly mentioned the National Defense Authorization Act (NDAA) of 2012. In particular, viewers address section 1021, which allows for indefinite detention without trial. NDAA, which allocates defense funding, is budgeted every fiscal year.