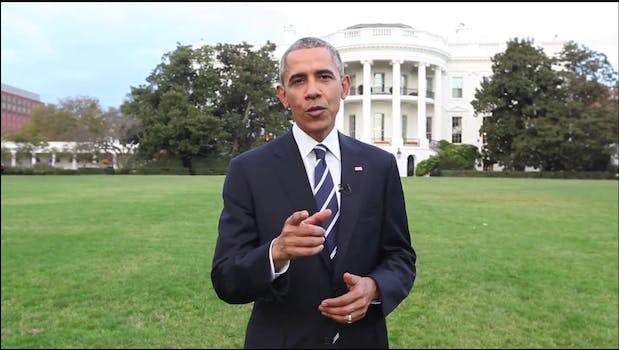 The next political argument you get into on Facebook could be with President Barack Obama himself.

The White House on Monday launched a Facebook page for Obama, and the commander-in-chief used the attention around the new page to make a pitch for action to reduce the effects of climate change.

“I want to make sure that the beauty of this particular national park, but also national parks all across the country and our planet are going to be there for Malia, Sasha, their kids, [and] their grandkids for generations to come,” Obama said as he walked across the South Lawn of the White House in a video post.

The president’s residence and workplace is part of a national park called President’s Park, which also includes a public park called Lafayette Square located across from the executive mansion’s northern gate.

In the video, the president stressed the importance of global cooperation to combat climate change, noting that U.S. officials were heading to Paris in three weeks for a new round of international climate talks.

“I hope you’ll join me in speaking out on climate change and educating your friends about why this issue is so important,” Obama said in a message attached to the video. “At a time when nearly three in four adults online use Facebook, this feels like a great place to do it. Share your thoughts in the comments, and pass this message on to folks you think need to see it.”

As Obama’s second term winds down, the White House has been preparing the soon-to-be-ex-president for digital life outside 1600 Pennsylvania Avenue. The president got his own Twitter account in May, although it—like the Facebook page—will still be run by the administration until he leaves office.