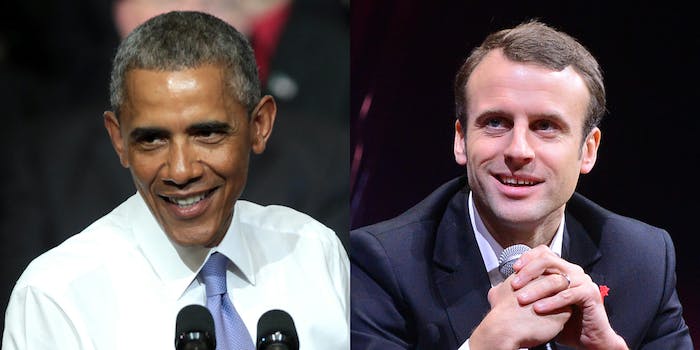 Pro-Trump Reddit and 4chan users want to ‘meme Macron out of existence.’

Former President Barack Obama has officially endorsed Emmanuel Macron in the French presidential election ahead of Sunday’s vote in which the centrist politician hopes to overcome his rival far-right challenger, Marine Le Pen.

“I know that you face many challenges and I want all of my friends in France to know how much I am rooting for your success. Because of how important this election is,” Obama said in a recorded statement. “I also want you to know I am supporting Emmanuel Macron to lead you forward. En march. Vive la France.”

The French presidential race is being observed closely by world leaders who see it as the latest challenge by the rising populist political movement and a threat to the future of the European Union.

Macron, who is leader of the liberal En Marche party, clashed with Le Pen, leader of the right-wing National Front, at a final televised debate on Wednesday night that lasted over two hours. Both candidates hoped to make a mark on the public, discussing immigration and the economy.

Le Pen, who currently trails in the polls, launched an insult laden attack on Macron’s credibility and career in banking and establishment politics. After she called him “a candidate of savage globalization,” Macron criticized Le Pen as a “high priestess of fear” and accused the nationalist of capitalizing on public fears.

In the end, French pundits and public polls suggested that the electorate found Macron’s composure most convincing. French newspaper Le Monde praised Macron, saying he “repeatedly denounced the ‘nonsense’ by the candidate of the National Front.”

Although Le Pen has cleaned up the image of her father’s far-right party and has proven a confident and politically strategic communicator, many within France regard her politics as merely “fascist-lite,” destructively racist and protectionist.

Le Pen has managed, however, to charm pro-Trump trolls in online communities on both Reddit’s r/The_Donald and 4chan who, galvanized by President Donald Trump’s praise of Le Pen, tried to mount disinformation and meme campaigns against her rival Macron—publishing efforts on social media through American Twitter accounts.

These subversive tactics, by and large, fell flat and did not impact the French electorate as they had in the 2016 U.S. presidential election.

“There’s a big cultural gap that these groups have to jump over to expand their message,” Ben Nimmo, a fellow at think-tank the Atlantic Council, told the New York Times. “The language and iconography of the alt-right is pretty specific. Most of it just isn’t going to translate well.”

A Suffolk University poll published on Thursday found that 82 percent of French voters viewed Trump unfavorably, surpassing France’s dislike for Russian leader Vladimir Putin and in stark contrast with Obama’s 90 percent favorability rating. It’s polls like this that many within France and throughout the international community hope will be reflected in Sunday’s results.

In the new age of shock election and referendum results, though, the French presidential election will have voters and onlookers on edge until the final ballot is counted.