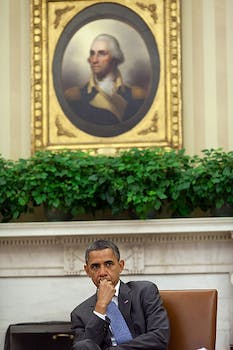 Watching for the attack

Obama's new poltical site is trending on Twitter, but it's not clear if that's a good thing.

When you see the phrase “attack watch” trending on Twitter, what comes to mind?

Is there an impeding terrorist attack?

Was someone just bitten by a shark?

Well apparently, #attackwatch was a hashtag started by President Barack Obama’s official Twitter account late Tuesday night to promote a new service where people can report lies about the president (and donate some cash).

On the Attack Watch website you will find detailed, role-playing-game like information, on who made the accusation and what sort of attack was made.

For example, under the attack file called “President Obama is a friend to Israel, despite unfounded claims to the contrary,” you’ll find former Massachusetts Gov. Mitt Romney and Texas Gov. Rick Perry listed in one column as the attackers who claim that Obama “has not been a strong ally to Israel,” according to the site. In the opposite column you’ll find detailed information that tries to disprove the lie.

On Twitter, #attackwatch has been mentioned more than 20,000 in the last 17 hours, according to statistics from Topsy, a social media search engine.

People on Twitter have used the hashtag as an opportunity to make fun of the president and the new service.

“George Bush is thinking ‘Why didnt I think of #attackwatch I could have found Osama when his friends use the hashtag,’” tweeted @AGeniusWroteIt.

“2 more Republicans elected you better check that out because it’s an attack on the Obama administration,” tweeted @moposc.

“I had an #AttackWatch but it was terrible at keeping time,” tweeted @ben_howe.

With the next presidential election a little more than a year away, it’s clear that Attack Watch is just a fancy new way for Obama to beef up his campaign. The response thus far was probably not what Obama expected,  but in politics, any sort of reaction can be a good thing.