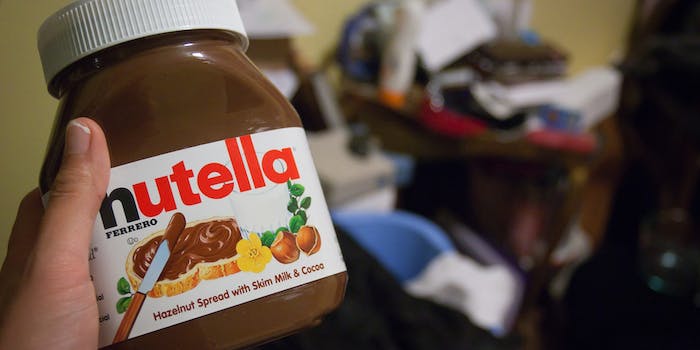 Nutelladay.com will not be going dark after all.

Readers of Nutelladay.com, the world’s foremost fan site for Nutella spread*, are relieved to learn that the 6-year-old site will not be going dark this Saturday after all. Last week, founder Sara Rosso mentioned the possibility to her fellow Nutella fans:

On May 25, 2013, I’ll be darkening the World Nutella Day site, nutelladay.com, and all social media presence (Facebook, Twitter), in compliance with a cease-and-desist I received from lawyers representing Ferrero, SpA (makers of Nutella). Seven years after the first World Nutella Day in 2007, I never thought the idea of dedicating a day to come together for the love of a certain hazelnut spread would be embraced by so many people! I’ve seen the event grow from a few hundred food bloggers posting recipes to thousands of people Tweeting about it, pinning recipes on Pinterest, and posting their own contributions on Facebook! There have been songs sung about it, short films created for it, poems written for it, recipes tested for it, and photos taken for it.

If anything, Rosso understated the fan response. Her World Nutella Day site lists more than 700 recipes featuring Nutella as an ingredient, while WND’s Facebook page has, since April 2009, linked to Nutella news, recipes and merchandise with the uncritical enthusiasm of a preteen girl running a Justin Bieber fan page.

Could fear of being thus mistaken for Bieber have inspired Ferrero SpA to send Russo the cease-and-desist order? Unlikely but we can’t say for sure, since we haven’t seen the actual text of the letter. Rosso said only that it “was a bit of a surprise and a disappointment, as over the years I’ve had contact and positive experiences with several employees of Ferrero SpA, and with their public relations and brand strategy consultants.”

It is not known which public-relations or brand-strategy consultants thought it a good idea to send Rosso the cease-and-desist letter. Whoever they were, nobody on Twitter seemed to agree with them:

This seems like a really bad example of how to treat one’s customer base – newsfeed.time.com/2013/05/21/wor… #Nutella #WorldNutellaDay

Why did Nutella-maker Ferrero put the kibosh on #WorldNutellaDay? Do they hate happiness? buswk.co/18f33r8 Maybe!

Apparently the stupid hammer was smacking one of the Nutella lawyers.

This is the closest we could find to agreement with Nutella’s decision, except we’re pretty sure it’s sarcastic:

Other fans were quick to point out that Nutella isn’t the only chocolate-flavored hazelnut spread on the market:

lol @nutella_italia looks like that JIF will be my new favorite chocolate hazelnut spread delish.com/food/recalls-r… … … twitter.com/amydemallie/st…

For that matter, fans with culinary skills can make their own at home:

I think u should try this @cvollanrize! Homemade Nutella Recipe | Leite’s Culinaria ow.ly/lfLSV

Naturally, many punsters noted the similarity between “Nutella” and “nuts.” AdWeek magazine even used it in a headline, but many rank-and-file Twitterers had already beaten them to the pun(ch).

How Nutella went nuts and mistreated its biggest fan. adweek.it/16M9cx2

Fortunately for Russo and fans of World Nutella Day, the online outrage helped the company finally see the light. Late on Tuesday afternoon, the company posted the following response on its Facebook page:

Positive direct contact between Ferrero and Sara Rosso, owner of the non-official Nutella fan page World Nutella Day, has brought an end to the case.

Ferrero would like to express to Sara Rosso its sincere gratitude for her passion for Nutella, gratitude which is extended to all fans of the World Nutella Day.

The case arose from a routine brand defense procedure that was activated as a result of some misuse of the Nutella brand on the fan page.

Ferrero is pleased to announce that today, after contacting Sara Rosso and finding together the appropriate solutions, it immediately stopped the previous action.

Ferrero considers itself fortunate to have such devoted and loyal fans of its Nutella spread, like Sara Rosso.

* Disclaimer from the Daily Dot legal team: We acknowledge that Nutella-brand chocolate-hazelnut spread exists, but have no opinion about said existence.