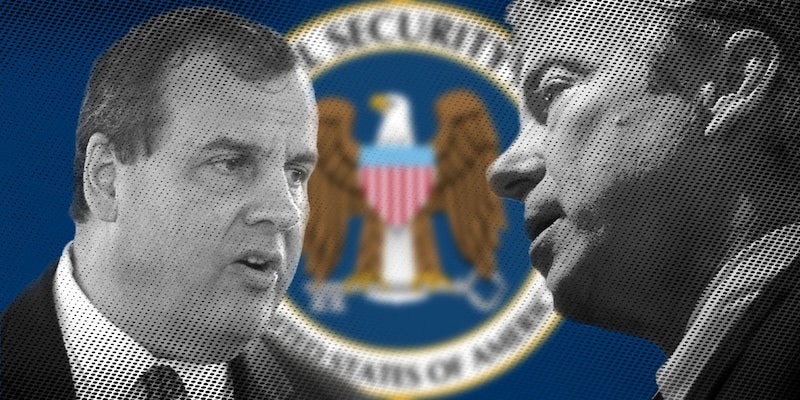 Rand Paul and Chris Christie attacked each other over NSA surveillance in the most heated exchange of the first Republican presidential debate on Thursday night.

Paul, the Kentucky senator who mounted a lengthy filibuster of Patriot Act spying powers earlier this year, blasted Christie, the New Jersey governor and former federal prosecutor, for his embrace of the National Security Agency and his expressed desire to expand its authority.

Asked by moderator Megyn Kelly if he was serious about blaming Paul for stymieing law enforcement’s ability to respond to another terrorist attack, Christie doubled down on his charge that Paul’s arguments were dangerous—and accused Paul of grandstanding in his fight against government surveillance.

“When you actually have to be responsible for [investigations], you can do it, and we did it for seven years in my office, respecting civil liberties and protecting the homeland,” said Christie, who represented the George W. Bush administration in several terrorism cases as U.S. Attorney for the District of New Jersey.

“When you’re sitting in a subcommittee just blowing hot air about this, you can say things like that,” Christie later said of Paul’s intense attacks on surveillance, as the audience erupted in what sounded like booing.

In a debate otherwise dominated by Donald Trump, Paul and Christie’s NSA fight captured the public’s attention like no other argument, becoming the “top social moment of the debate” on Facebook and the most-discussed moment on Twitter.

The bitter dispute between the candidates over the proper role of domestic surveillance in the United States was particularly noteworthy because it exposed a major fault line in the Republican Party.

Paul has built his short Senate career on libertarian fury at far-reaching surveillance and intrusive national-security tactics, earning plaudits from Republicans who see the NSA efforts exposed by Edward Snowden as the product of an overgrown security state built by President Barack Obama.

But Christie’s tough stance on “protecting the homeland” likely appeals to a far larger segment of the Republican Party. For decades, war hawks calling for an expansion of America’s overseas military presence have defined the Republican foreign-policy doctrine. After the Iraq war, many of these Republicans shifted tactics, calling for more intrusive surveillance instead of larger troop deployments.

Polling on domestic surveillance is a mixed bag that reflects these competing views. In a spring 2014 Pew Research Center survey, most respondents opposed government programs that collect the phone and Internet records of U.S. citizens. They also overwhelmingly agreed with Paul that they deserved to keep more of their privacy even if it meant increasing the risk to their safety. Interestingly, though, more Americans are worried about counterterrorism programs not doing enough to protect them than they are about those programs threatening their civil liberties.

This divide came to life at the debate in the Quicken Loans Arena in Cleveland, Ohio, as both Christie and Paul received loud applause and boos for each of their comments.

Christie told the audience, to loud applause, that he would “make no apologies, ever, for protecting the lives and the safety of the American people,” adding, “We have to give more tools to our folks to be able to do that, not fewer.”

A Christie spokeswoman did not respond to a question about what new surveillance tools the governor would seek as president.

“The NSA doesn’t need more illegal tools,” Sophia Cope, a staff attorney at the Electronic Frontier Foundation, told the Daily Dot in an email. “Congressional oversight revealed that the illegal bulk collection of Americans’ phone records was ineffective at foiling terrorist plots. Sen. Paul’s response to Gov. Christie was simple: get a warrant.”

Paul pushed back on Christie’s suggestion that his opposition to the NSA’s bulk telephone-records collection meant that he didn’t want to surveil terrorists. “I want to collect more records from terrorists, but less records from innocent Americans,” he said, earning his own loud applause.

Using rhetoric very similar to his marathon filibuster against the Patriot Act, Paul argued that the Fourth Amendment explicitly prohibited the kind of general search that the bulk-records program—which a court struck down in May—allowed the government to conduct.

“You fundamentally misunderstand the Bill of Rights,” Paul told Christie.

.@ChrisChristie's disregard for the Constitution sets a dangerous precedent & ignores wisdom of our Founding Fathers. http://t.co/U2WCdnkJ1V

Christie made some strange and surprising fumbles recalling his time as a U.S. Attorney. He said, for example, that he was appointed by Bush on Sept. 10, 2001, the day before the attacks, when in fact the appointment came on Dec. 7 and he did not begin serving until 2002. (The Christie campaign did not respond to a question about the governor’s version of history.) He also called the court that grants applications for surveillance warrants “the Foreign Intelligence Service Court” instead of the Foreign Intelligence Surveillance Court.

Christie’s explanation of his work as U.S. Attorney in New Jersey also raised serious questions that his campaign might prefer to avoid.

“When you’re responsible for protecting the lives of the American people,” he told Paul, “then what you need to do is to make sure that you use the system the way it’s supposed to work.”

But Christie was prosecuting terrorism cases for the Bush administration at a time when the surveillance state was, in the view of later courts and independent reviews, running roughshod over Americans’ privacy and civil liberties. He and Bush were demonstrably not using the system “the way it’s supposed to work.”

“Governor Christie ignored the law and all the evidence,” Alex Abdo, a staff attorney at the American Civil Liberties Union, wrote in an email to the Daily Dot. “Bulk collection is illegal, and two separate governmental review groups have said it didn’t make the country any safer.”

As the independent journalist Marcy Wheeler put it:

He was US Attorney from January 2002 to December 2008 — so he in fact would have been in office during the two years when the phone dragnet worked through the Servic–um, Surveillance court, and four years of the Internet dragnet. But if, as he implies, he was involved in the dragnet for the entire span of his tenure — and remember, there were huge cases run out of Trenton right out of 9/11 — then he was also using the fruits of illegal wiretapping to do his job. Not Servic — um, Surveillance court authorized dragnets and wiretaps, but also illegal wiretaps.

Christie may be able to argue that he helped safeguard the homeland through his terror prosecutions. But he now faces the challenge of explaining how he safeguarded civil liberties while using data gathered by blatantly violating them.