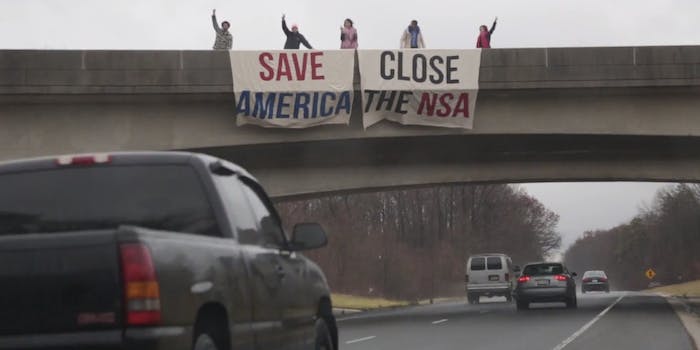 The commute to the National Security Agency is now a little more awkward.

A handful of privacy activists associated with the Bill of Rights Defense Committee have unfurled a huge anti-NSA banner from an overpass, plainly visible to anyone driving to NSA headquarters in Ft. Meade, Maryland.

Its message was simple: “Save America. Close the NSA.”

The BORDC actually pulled the stunt Friday, though it took a few days for the video to make it to YouTube.

It’s anyone’s guess how many NSA employees had their day ruined by the banner, but there’s little doubt that public scrutiny of their work is wearing on morale. The agency has gone so far as to write open letters to employees’ families praising their work, and sent them talking points to bring to the Thanksgiving table.

The banner was put up in honor of the upcoming anniversary of the signing of the Bill of Rights on December 15. Critics say the NSA, whose vast programs to track people online and through phone activity seem never-ending, often say the agency violates the Fourth Amendment, which guarantees Americans a right to privacy from government searches without a warrant.

Despite the BORDC’s wishes, the NSA isn’t about to be shut down anytime soon. There are, however, bills pending in Congress that would mitigate some of its powers.