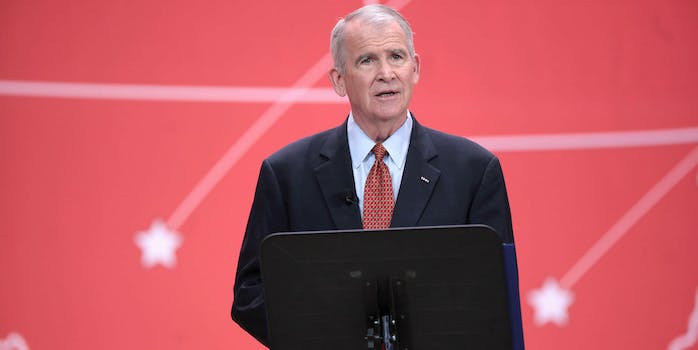 It's been a rough week for the gun rights organization.

The news came in the midst of its annual convention in Indianapolis, Indiana, and just after President Donald Trump had a cell phone thrown at him while giving a speech to NRA members.

On Saturday, Richard Childress, the NRA’s first vice president, read a statement from North explaining his resignation: “Please know that I hoped to be with you today as NRA president endorsed for reelection,” an excerpt published in the Washington Post revealed. “I’m now informed that will not happen.”

LaPierre wrote in a letter sent to the NRA’s board on Thursday and obtained by the Wall Street Journal saying that he was the target of extortion by North, who is concluding his first term as president of the group. LaPierre alleged that North threatened to expose damaging information including, according to the letter, “a devastating account of our financial status, sexual harassment charges against a staff member, accusations of wardrobe expenses and excessive travel expenses.”

The departure comes on the heels of a lawsuit the NRA filed against its longtime public relations firm, Ackerman McQueen, for refusing to account for the money it bills the organization. North has a $1 million contract with Ackerman McQueen to produce his show, American Heroes, which runs on the Ackerman McQueen-operated NRATV, according to the Associated Press.

Of course, Twitter users found plenty of irony in the situation.

If only there had been some kind of warning that Oliver North was untrustworthy https://t.co/2bD1Iu3R7p

One might say that Oliver North is leading an insurgency “contra” LaPierre pic.twitter.com/Hdg3GilocD

When Oliver North is your moral compass, you’ve fallen off the map. Who would have thought these crooks would scam and screw each other?

TFW your organization is too unprincipled for Oliver North

And some thought we might be stuck in a time warp.

The news is all Oliver North, Joe Biden, Anita Hill and Donald Trump. Please tell me that it's actually 1987 and what I thought was the last 30 years was actually just a really, really weird bad dream

Joe Biden just announced for president; Oliver North is at the center of legal and financial scandal; an over-the-top party of the media elite will be all about Donald Trump. What year is it?

The NRA is also facing an investigation into its finances from New York state Attorney General Letitia James. The NRA’s annual meeting ends on Sunday.