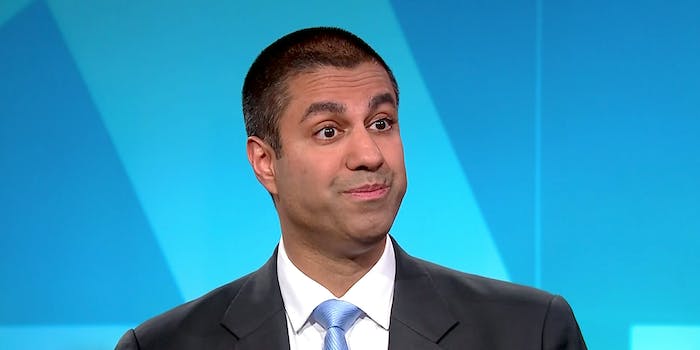 Federal Communications Commission (FCC) Chairman Ajit Pai was given a gun on Friday as he picked up an award for “courage” from the National Rifle Association (NRA).

The recipient of the Courage Under Fire Award, Pai received a handmade Kentucky long gun, which was not brought on stage but will be displayed in the NRA museum in Fairfax, Virginia, with a plaque honoring him. The FCC chairman was chosen for the award at the Conservative Political Action Conference because of his recent push to end Obama-era net neutrality protections for the internet.

“Ajit Pai, as you probably already know, saved the internet,” Dan Schneider, executive director of the American Conservative Union told the crowd by way of introduction. “As soon as President Trump came into office, President Trump asked Ajit Pai to liberate the internet and give it back to you.

“Ajit Pai is the most courageous, heroic person that I know. He has received countless death threats. His property has been invaded by the George Soros crowd. He has a family and his family has been abused in different ways. Chairman Ajit Pai, thank you so much for everything that you’ve done.”

The FCC voted in mid-December to repeal net neutrality in a decision that was split down party lines and which took place amid fierce public outcry. Critics said that the law, in fact, undermined the fundamental principle of the internet that all traffic was to be treated equally by internet service providers. The repeal allows companies to selectively block content or slow access to it for profit.

Gizmodo reports that the FCC is facing several lawsuits submitted by internet activist groups and challenges by 23 state attorneys general.

“Some people urged me to go for sacrifice bunts and singles and nibble around the edges — make some minor changes but I don’t play small ball,” Pai said as he received the NRA award. “I decided that I wanted to make a fundamental change in the way the [FCC] operates. I think it’s important for us to set rules for the road that allow the American people to take control of their own lives, instead of having it run out of an American bureaucracy.”

Pai will be counted alongside other high profile winners of the award, which is named after former NRA president Charlton Heston. Vice President Mike Pence won it in 2017.