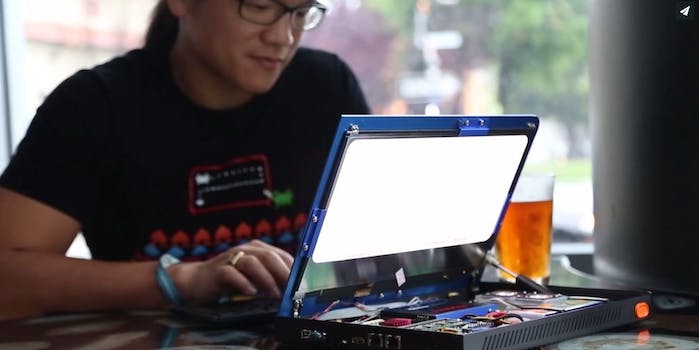 Novena, the hackable laptop, raises more than $100K in 48 hours

You don't own something unless you can hack something.

The Novena, a powerful open source laptop designed to be hacked, modified, secured, and extended, has fundraised over $112,000 in its first 48 hours.

Two Singapore-based engineers with long histories in open hardware, Andrew “bunnie” Huang and Sean “xobs” Cross, are behind the new machine, which has been long-anticipated in open source hacking circles.

Last year, NSA leaks from Edward Snowden showed that American intelligence agencies can compromise even newly purchased laptops by diverting them during delivery and loading software to help provide backdoor access to the machine.

The best way to be sure that your machine is not compromised is to either build it yourself or to use an open source, easily modifiable machine. There’s still no way for the general public to do that for laptops. But the Novena is an important, highly visible step towards that ideal.

The machine isn’t meant to replace Windows or Mac laptops in the world. And it’s not “for the faint of heart,” as Huang says in his blog. It’s probably the only laptop to ever ship with a screwdriver, meaning that owners are going to get their hands dirty as receiving the laptop is only the beginning of the journey.

One thing that might throw you off is that the Novena screen opens the “wrong way” (watch the video above if you’re not sure what we mean by that.) This is by design. It allows the computer to be usable as a “wall-hanging unit” when the screen is closed and allows for easier access to the hardware for hacking—which is the project’s ultimate goal.

If you can’t hack a machine, you don’t really own it. This laptop would provide the first opportunity for most consumers to do just that.

“You’re not supposed to open your iPhone, it’s on contract with your carrier — if you break it, you have to fix it,” Huang told The Next Web recently. “So we’re trying to change that trend and give people the power that they need to hack and modify their product. Basically we’re giving you fully jailbroken hardware. We never put the hardware in jail.

So the reason you have to jailbreak a phone is because they took the hardware and locked it up. We don’t even lock it up. We give you everything—you’re a free man.”

The fundraising campaign is being hosted on Crowd Supply, a crowdfunding website designed for engineering projects just like the Novena. The ultimate goal of $250,000 looks to be easily within reach.

For $500, you’ll get a printed circuit board with 4 GiB of RAM, a 4GiB MicroSD card, and a wifi card that boots to Debian Linix over HDMI. At $1,100, backers get a full desktop ready to work with any keyboard and mouse. At $1,900, a laptop is available with a full battery. The highest option is the massive $5,000 “heirloom laptop” with a custom designed wood case from Portland-based designer-craftsman Kurt Mottweiler.

It’s expensive. But that’s to be somewhat expected in the fundraising stage for a product that is not designed for general use. This is hacker’s tool and toy, not your grandmother’s laptop.