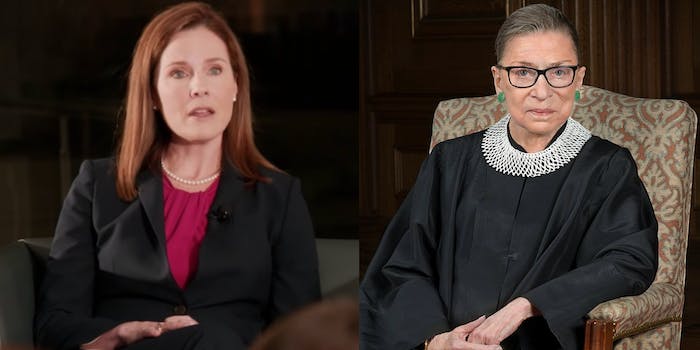 It isn't going over well.

“LIMITED EDITION: Show your support for Pres. Trump’s Supreme Court nominee, Judge Amy Coney Barrett, with your very own Notorious A.C.B. t-shirt! Claim yours here,” it wrote, along with the shirt that is plastered with Barrett donning a crown and the words: “NOTORIOUS A.C.B.” The link takes users to the fundraising website of the NRSC, which works to elect Republicans to the Senate, and offers the shirt for any donation of $25 or more.

“The name is obviously a reference to Notorious B.I.G., who is this large, imposing rapper, a really powerful figure; and Ruth Bader Ginsburg is this 90-pound Jewish grandmother,” Knizhnik told the New Republic in 2014 after the nickname caught on with help from memes and merch. “The juxtaposition of the two made it humorous, but is also a celebration of how powerful she really is.”

And after another especially fiery dissent in the 2014 Burwell v. Hobby Lobby case, Ginsburg became a viral sensation, and the Notorious RBG moniker stuck.

When Ginsburg passed away on Sept. 18, Notorious B.I.G.’s son, C.J. Wallace, told TODAY his father would be “honored to share Notorious title” with the late justice.

People online are calling the move to brand Barrett as “Notorious ACB” “classless” and are scoffing at the idea that Barrett will match Ginsburg’s legacy should she be controversially confirmed by the Republican led-Senate before Election Day, with one dubbing her the “Great Value” version of Ginsburg.

However, some conservatives, including Sen. Marco Rubio (R-Fla.), are hopping on the “Notorious ACB” bandwagon, even making artwork of Barrett in a crown.

Barrett previously said that “should I be confirmed, I will be mindful of who came before me,” and now people are attempting to hold her to that sentiment by urging her to denounce the “tacky” T-shirts.